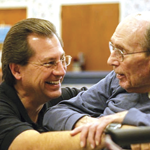 COMPASSION FILLS Paul DeNeui's heart when he visits nursing homes, assisted care, and mental health facilities. He ministers to those suffering from physical illnesses, many of whom are nearing the end of their lives.

When the residents gather in the facility's meeting room, a lot of them are hooked up to IVs. It can look like Paul stepped into a hospital intensive care unit rather than the common room of a nursing home. Many are discouraged, lonely, and afraid of life after death.

Paul sees these men and women through the lens of God's love. He has been commissioned to shine God's light and bring His everlasting love wherever he goes.

Crisscrossing the beautiful state of Oklahoma in his Nissan Versa, Paul, a 1995 Rhema graduate, visits 38 facilities every month. Compassion moves him to tell men and women about Jesus—their friend, healer, restorer of dreams, and giver of joy and hope. It's Paul's mission to make sure they are given the opportunity to know Jesus as their Lord and Savior.

"I see all these people," says Paul. "They're all going to go somewhere. I want to make sure they go to Heaven. This could be the last time I have a chance to talk to them. If they don't know Christ, that's critically important."

Here are the stories of some of the men and women* he has met across the Sooner State.

The Sound of Music Once Again

PAWNEE, OK. Sarah had been a successful opera singer, traveling the world and singing before many. Also an accomplished piano player, she once led praise and worship at a church. Now, far along in her life, Sarah is in a nursing home. For a long time, she didn't sing or play the piano. She felt like the past was just that—the past.

Whenever Paul visits Sarah's facility, she listens attentively as he shares who they are in Christ and what Jesus did for them on the cross. One day when they began to sing hymns, Sarah joined in, and the room was filled with a beautiful operatic voice.

Sarah's face lit up that day. Afterward, she told Paul that when they were singing, she felt like she was ministering along with him.

"She was using her voice again, and she hadn't done that for a long time," shares Paul. God dropped in Sarah's heart a new purpose for her life. No one comes to her nursing home on Sunday to minister. Suddenly, Sarah knew what she could do.

"There's a piano here," she said. "I think I'm going to start playing it and leading songs on Sunday afternoons."

Sarah now blesses her fellow residents every week with her wonderfully dulcet singing.

'He Needs a Miracle!'

SPIRO, OK. Michael is a regular whenever Paul ministers in his facility. Michael is always in a Geri chair and always has lots of tubes and wires connected to him. His feeble body reflects the destructive effects of disease. A nurse wheels him to the meeting room for the services.

One day as Paul was preaching, Michael stopped breathing. Nurses rushed to his side and quickly wheeled him out of the room.

Of course, this caused a lot of commotion. The residents were in shock.

"Everybody," Paul said redirecting their attention. "He stopped breathing. He needs a miracle, and we're going to pray." Paul prayed and spoke to Michael's body—that the power of God would flow through it and that he would live and not die.

A few seconds later screams of joy were heard coming from the hallway. Michael had revived!

God gives life to the dead.

Thrilled to Be Baptized

MUSKOGEE, OK. When Susan heard the Good News, she was ecstatic. She wanted everything the Lord had for her.

One day after the service, she anxiously approached Paul wanting to be baptized that day. He was willing but didn't know where in the facility he could perform the baptism. After checking with the activities director, she took him to a shower room that had a whirlpool tub with a patient lift attached to it.

Perfect! Several residents crowded into the room to watch the special occasion.

Susan was strapped in the chair. The lift raised her up and slowly lowered her into the water.

Paul prayed, and Susan bent forward, lowering her face and head into the water. When she sat back up, she was thrilled, just thrilled!

WARNER, OK. While most of the people Paul ministers to are elderly, 15 to 20 percent are younger. They've been injured—usually in car accidents—and can't take care of themselves.

Kerri was in her early 20s when a car accident left her with a broken neck. She had limited use of her hands but could not move her legs at all.

One day Paul was sharing on how to be led by the Spirit of God. After the service, Kerri approached him and said, "I've never heard God's voice."

"You probably have but didn't know it," Paul responded. He began sharing with her the different ways God speaks to us, including getting "checks" in our spirit.
Tears began streaming down Kerri's face. "I was standing in front of my friend's house, and they said, 'We'd be glad to take you home.' I had that little check not to get in their car. Are you telling me that was God?"

"Yeah," Paul said soberly. "He was trying to protect you, trying to help you."

"If I had known that was the voice of God, I wouldn't be here today."

The young girl continued coming to Paul's services. She loved the Lord and grew in her faith. Kerri passed away a few years after meeting Paul. He officiated her funeral.

The compassion of God drives Paul to strengthen the saved and save the lost. He shines the light of the glorious Gospel in the facilities he visits. He does this freely, without charge. Residents are finding hope and healing, and they are finishing their race with joy!

*The names of the individuals in this article were changed due to HIPAA privacy laws.

TO LEARN MORE about Paul, go to PaulDeNeui.org.

PRAY that the eyes of the residents' understanding are ENLIGHTEN as Paul teaches them WHO THEY ARE IN CHRIST and how they can be a part of the END-TIME HARVEST through prayer (Luke 10:2).