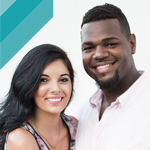 AFTER ATTENDING community college for two years, Fabian McCune was frustrated and discouraged. He had just failed an exam in a subject he was proficient in. But while sitting in class, he heard the Lord say, "This is not where you're supposed to be." At that moment, he knew he was supposed to attend Rhema Bible Training College.
Fabian left the college in Michigan. Within two months, he was accepted to RBTC and living in Tulsa, Oklahoma. Having attended Word of Faith International Christian Center in Southfield, Michigan, Fabian was familiar with Kenneth E. Hagin and Rhema. The pictures he had seen in The Word of Faith magazines growing up were now a reality. "I felt like I had reached the Promised Land. I felt at peace," says Fabian.

Bethany McCune was also familiar with Rhema while growing up. At eight years old, she moved from Texas to Broken Arrow so her mother could attend the school.

When Bethany was five years old, she was called to full-time ministry. But she fell away from God during her teen years. She blamed God for allowing all the seemingly unfair circumstances in her life up to that point. Her anger turned into hatred, and she became an agnostic.

She was headed on a downward spiral, but in July 2010, at the age of 19, a Rhema graduate and his wife invited her to Campmeeting. She accepted the invitation and rededicated her life to Christ that week. But there was more. God told her she was supposed to go to Rhema.

Not knowing what the Lord had spoken to Bethany, the couple who took her to Campmeeting offered to pay her tuition. "My life completely transformed within a matter of a month," she says.

A Season of Testing

After graduating second year, God directed Fabian to stay in Tulsa. Music was always the center of his life, so naturally, he thought he would be a worship leader. But in 2008, God told Fabian that he was called to pastor. The Lord instructed him to enroll in the Rhema School of Pastoral Ministry. A passion for Columbus, Georgia, began to grow in his heart, and the Lord showed him he would start a church there.

Immediately after graduating in 2009, Fabian was ready to go! But the vision was for an appointed time. It would be another four years before God gave him the green light. During that time, he traveled with the Hagins on crusades, taught in Sunday school, and led worship for Synergy and Prayer School.

Hard times came knocking, and his faith was tested in this season. For three months Fabian was without a car or his own apartment. At night, he slept on a friend's couch. "In those hard times, I was able to seek God, grow, and allow the Holy Spirit to lead me and build my character for what I'm doing today— pastoring a church!" he shares.

Fabian and Bethany met at Rhema. They became friends, began dating, and eventually were married.

Fabian revealed his plans to Bethany to start a church in Georgia. She felt being in a leadership role over people spiritually—after only having served God for three years—was a huge stretch. Although her preparation at RBTC had equipped her, she admits, "It wasn't something I felt qualified for at all. But one of the biggest things I've learned with pastoring is that God doesn't call the qualified, He qualifies the called."

That mantra has been the foundation for the McCunes' ministry. In 2013, only six days after they were married, they moved to Columbus with a small team to start Vital Church where they serve as lead pastors. Five years later, the growing congregation is a light to this southern town.

The vision for Vital Church is taken from Acts 2:42–47: to propel unity, build community, and be vital. Fabian and Bethany do this by bringing together people of every race, denomination, and background to build a solid community that does life together the way the early Church did in the Book of Acts.

One way Vital Church makes this happen is by hosting community events as a way to show the love of God to the people in the surrounding neighborhoods. The events are well received with hundreds attending. As a result, the church has established a positive presence in the community.

They also have Bible studies where church members learn who they are in Christ by going through books such as The Believer's Authority. And people are taking what they've learned back to their communities. "We're emphasizing that you are the church," says Bethany. "You can be vital in your community and workplace. You can represent Christ wherever you go."

The McCunes are seeing a difference in the lives of the people in their congregation. There are testimonies of restored marriages. Some members had wanted nothing to do with church. But now they are giving it a chance because of what they're seeing and learning at Vital.

One woman's heart was hardened towards church of any kind. But because her husband and daughter had been attending Vital, she decided to visit. One Sunday after service, she met Pastor Fabian and very frankly told him "I think you're a fake." But she kept coming back.

Eventually, her heart began to soften. She went from hating church to loving it. But even with a new attitude, she decided to leave. Three weeks later she came back and tearfully acknowledged that Vital Church was the real deal and there was nothing else like it in the city.

The McCunes are committed to following God. Part of that for them means staying connected to Rhema, which they describe as their home and family. They come "home" for every conference that Rhema has to offer.

As they continue to grow in their roles as pastors, they are expecting God to do big things in their community and city. Their dream is to see the different denominations in Columbus come together. "We are giving, loving, and reaching out to affect those around us," says Bethany. "And because we are stronger together, we will be vital in our city, our nation, and our world!"

TO LEARN MORE about Fabian and Bethany McCune, go to vitalchurchcolumbus.com.

To STAY SENSITIVE to the Holy Spirit

For a WORSHIP BAND and CHILDREN'S DIRECTOR to join Vital

For OVERFLOW in the FINANCES of the ministry