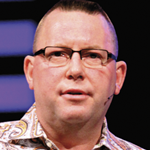 COMPASSION IS A VEHICLE for God's power to ride on. Whenever Jesus was moved with compassion, He did something miraculous! What does this mean for us? As His ambassadors, our understanding of compassion will affect how we allow the Holy Spirit to flow through us to others.

In the Gospels, we see this truth: compassion moved the Master to perform the miraculous. For example, we read in Luke 7 that Jesus walked up and wrecked a funeral!

12 And when He came near the gate of the city, behold, a dead man was being carried out, the only son of his mother; and she was a widow. And a large crowd from the city was with her.
13 When the Lord saw her, He had compassion on her and said to her, "Do not weep."
14 Then He came and touched the open coffin, and those who carried him stood still. And He said, "Young man, I say to you, arise."
15 So he who was dead sat up and began to speak. And He presented him to his mother.

It says "when the Lord saw her, He had compassion on her." What Jesus saw compelled Him to action.

WHAT IS COMPASSION? Sometimes the easiest way to understand something is to look at what it isn't. Compassion is not sympathy. In simple terms, sympathy means "to feel for" another. Aren't you glad the Bible didn't say, "For God so loved the world that He sent a sympathy card"? No! He did something. He saw us in our mess, stepped into the situation, and solved the problem.

COMPASSION IS NOT EMPATHY, which carries the idea of "to feel into" or "feel with." We see this in Galatians 6:2 and Romans 12:15. In these verses Paul talks about bearing one another's burdens or weeping with those who weep and rejoicing with those who rejoice. That's empathy, and it's good and right in its proper place. But if that's as far as we get, no one will be helped or healed.

Sympathy and empathy don't bring power on the scene. They are counterfeits of compassion. They feel for and feel into, but COMPASSION ENTERS IN AND DOES FOR.

Jesus set the standard on compassion. He was always willing and able to help. He leaned into people and into their messes. When the centurion came to Jesus about his servant, Jesus responded, "I will come and heal him" (Matt. 8:7). There was no hesitation.

Persistent prayer is not about overcoming God's reluctance or talking Him into doing something. It's about making a connection with His compassionate willingness. He's already inclined to show mercy. He has been since the world began.

How do we make a connection? Number one is faith. FAITH TAKES HOLD OF WHAT GOD OFFERS. The centurion's servant was healed because of the centurion's great faith.

In Mark 9:22–23 (NKJV), when the father of a demon possessed boy asked Jesus for compassion and help, Jesus replied, "If you can believe, all things are possible."

The second way we make a connection is through the gifts and manifestations of the Spirit. It is by the prompting of the Holy Spirit, which is not in response to an individual's faith. In the story of the widow, the dead boy obviously didn't exercise faith. And there's no indication that his mother was in faith either. She was crying and squalling! But Jesus was moved with compassion and did something.

What does compassion mean for you and me? As God's representatives, we need to love people. COMPASSION HAS NOTHING TO DO WITH PERSONAL PREFERENCE. Move past that and get to the heart of Jesus. He died for all people. It's about Him and them. Let's make ourselves available to the Spirit of God on behalf of others and expect God to do the unexpected!