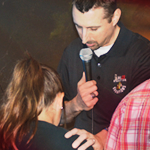 "WHAT AM I going to do?" The writing was on the wall—his job wouldn't last much longer. Young and newly married, Jay DePalmo, a '96 graduate of Rhema Bible Training College, was about to take another step in God's plan.

A building caught his eye as his car pulled up to an intersection. God's voice surprised him, "Go in and apply." It was the strongest Jay had ever heard the Lord speak in his heart—not audibly, just in his heart—so clear that he felt like turning around as if someone was in the backseat! Instead of continuing home, he turned the wheel, parked his car and went inside "Hobby Lobby" for the first time in his life.

Within a week Jay was offered a co-manager position. He and his wife, Amanda (an '05 RBTC graduate), packed their bags. The 18-year adventure would take them through Indiana, Ohio, Oklahoma, and Georgia before returning to the corporate office in Oklahoma City.

Every time Jay moved for his job, there would be a church in the new area that needed help. The DePalmos would roll up their sleeves with the attitude of, "If God has us here, let's put our hearts into it—let's do it for God!"

In the meantime, Jay and Amanda would attend Winter Bible Seminar and get refreshed. "I know Pastor Hagin gears WBS toward ministers, but he would say things that hit me right where I was at in the business world," said Jay. "Every year, it was a charge-up week for me—plug in to the Word, get under the anointing, and let God minister."

And every year Jay would see Rhema friends who graduated with him, now in ministry positions. He'd think to himself, "What am I doing?" But he kept checking in with the Lord and sensed that he was in the right place.

He remembers his expectation as a student, "If God calls you to Rhema, He calls you to ministry, not a secular job." But when Jay graduated, the Lord started using and revealing talents for business that Jay didn't know he had!

"I don't think I saw the whole picture until a few years ago," he said. "It wasn't that I wasn't going to do ministry, I just wouldn't do it in a paid position." God helped him get the career part of life right—successfully supporting his family—so he could do the ministry part as a volunteer.

The Spirit and Business

"Learning how to be led by the Spirit in business and regular life is just as important as if you're a pastor or a ministry leader," Jay shared. "Rhema helped me rely on the Spirit of God—to know what the Lord is saying and how to pray and make decisions. That's invaluable!"

The simple training of quieting himself and knowing what to do proved to be crucial. When one of Hobby Lobby's struggling markets needed a district manager, Jay stepped up to the challenge. "It was a mess! But I knew the anointing of God was with me," he recalled. "And it took a lot of anointing to turn it around."

Jay was young for the position, and leading managers was a new ballgame! But God showed him what to do. He believed for favor, leaned on God for wisdom, and prayed. "If you don't know how to pray the Word, you're just throwing stuff at the wind."

He prayed for the stores, the management, the recruiters, and himself. Many times a thought would come, "We need to focus on this." So Jay would move his people in that direction. Soon corporate direction would come about the very same thing he had in his heart. His district would then be ahead of the game.

After the Lord showed Himself faithful with the drastic turn around in Jay's district of stores, he sensed the Lord drop something new in his heart about a corporate-level position. He wasn't interested before, but suddenly he had a desire to do it! He thought, "I don't know if this is anything I want, Lord. Do You want me to run manufacturing?" God did, so Jay did. Once again, he found himself with a challenging opportunity to help bring leadership to a different area of the company.

Jay oversaw Hobby Lobby Manufacturing for several years. In time he saw the Lord repeat what He did when Jay was a district manager. This time it included several promotions along the way.

One day Jay was surprised by David Green, the founder and CEO of Hobby Lobby. David dropped in his office and said, "I've got something else I want you to do." He encouraged Jay to pray about the CEO position for Mardel, a Christian bookstore and education supplier.

"It wasn't anything I was looking for at all," Jay reflected. "I had no clue they were going to make a change!" But he sensed the Lord leading him. Today Jay DePalmo is at the helm, and he's bringing his well-tested reliance on the Holy Spirit with him.

A Heart for Teenagers

Jay always had a heart for teenagers and focused on youth ministry at RBTC. Even though his corporate calling was quite different, Jay and his wife were able to freely help churches in a wide array of capacities with their ministry training from Rhema.

Supporting others prepared them for what was in their hearts all along—youth pastoring. Now at Good News Church in Yukon, Oklahoma, the DePalmos have stepped into their first full-blown roles as volunteer youth pastors. Jay laughingly shares that most people like the little kids but think teenagers are too difficult. "It's the exact opposite for me!"

"Sharing the Word of God, seeing the wheels turn as teenagers learn and grow—it's fuel to me," says Jay. He passionately believes that teens learn at a higher level than adults often give them credit for. They're digging into the Bible, asking questions, and seeking answers in the Word.

"We've seen a lot of teens get baptized in the Holy Ghost," says Jay. "That's a big thing!" They are endeavoring to be led by the Spirit, know God, and walk out the Word on their own—even when they have tough home situations. "When you've instilled in a young person to always go back to the Word of God, that's a great feeling!"

Jay counts it an honor to be part of what God is doing in the youth and a privilege to be working with the Green family. He says, "God calls people into business just as much as He calls people into ministry. I didn't realize for a long time that He was calling me into both! I often describe what I'm doing this way: 'I'm a CEO by day and a youth pastor on nights and weekends.' "

But when it comes down to it, it's not titles that are important to Jay DePalmo. Being known as a man who loves God—doing the best he can to follow God and take care of people—that's what comes out on top.

Twenty years ago, it was easy for me to despise where I was at saying, "I'm just throwing groceries and unloading trucks. What I'm doing is not important." But it was
important at the time!

I didn't realize it then, but it was through being faithful and doing those small things that God was able to get me where I needed to go.

Don't despise small beginnings! You've got to start somewhere. Do what you know to do—right now—and give it all to God. He will direct you right where you're supposed to go.

TO LEARN MORE about the ministry in Yukon, Oklahoma, visit goodnewschurch.tv.

TO LEARN MORE about Mardel bookstores, visit mardel.com or connect on social media!