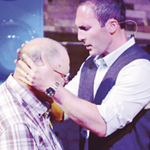 The year was 1997. It was a Thursday night in Farmers Branch, Texas, at a church revival.

The evangelist invited anyone who needed a touch from God to come forward. Sitting in the back of the church was a young, angry Chad Gonzales. He didn't want to be there and was basically dragged to the meetings.

Although Chad grew up in church and played the drums during worship, he doubted the existence of God. His dad had told him stories of healings in the 50s, and Chad wondered why it wasn't happening today.

"God, if You're even real," Chad thought, "I want to see what You've got." As praise music filled the air, he made his way to the front.

Chad stood at the altar, arrogant and mad. When the evangelist was about three feet from him, electricity shot through his body. The power of God was so strong that he began running around the church. In that moment, Chad knew the Lord was real. God filled his heart with His unconditional love and peace. His spirit was awakened.

"[That encounter] is what made me passionate about what we're doing now," says Chad. "I was a good church boy. I was in church three times a week my entire life. If I was questioning if God was real, what does that say for the person who shows up at Christmas and Easter?"

Sometime later, while Chad was working on his master's degree, it began to weigh heavy on him to go into full-time ministry. Preaching, however, was not a part of his plan. He didn't care about being in front of people. He was content to just play the drums.

After much wrestling, Chad surrendered to the Lord's plan. In 2001, he stopped his graduate studies and moved to Broken Arrow, Oklahoma, to attend Rhema Bible Training College.

While at Rhema, Chad met his wife, Lacy, a 2001 graduate. Two weeks after Chad graduated in 2003, the couple married. The newlyweds moved to Chad's hometown of Beaumont, Texas, where Chad served his pastor for three years.

During that time, Chad completed a master's degree in counseling. He also began devouring books on healing. He read all of John G. Lake's and Smith Wigglesworth's books. Their testimonies of miraculous healings gave him a greater desire to see Jesus move in the same way today.

In 2006, Chad and his wife left Beaumont to pioneer Lighthouse Bible Church in College Station, Texas. Their first service was the Sunday after Labor Day.

Chad began teaching healing to his congregation from the standpoint of our union with Christ. Jesus is the Vine, and we are the branches. As He is, so are we. And what flows through Christ, flows through us. In two short months, healings and miracles started happening.

On a Sunday morning in November, a blind woman regained her eyesight. In another service, a four-year-old boy with Hodgkin's disease was healed. He had three tumors on his head, one the size of a golf ball. While Chad's hand was on the young boy's head, he could feel the tumor shrinking under his hand.

These two miracles lit Chad's fire. The church began seeing healings and miracles every weekend. Lighthouse Bible Church became known as the place where miracles happened. In a two-year period, 20 people with cancer were healed! One woman with stage 3 breast cancer was healed. All of the many wonderful healing miracles that happened are just too numerous to record.

In 2012, God began speaking to Chad and Lacy about moving to Arkansas. They transitioned Lighthouse Bible Church over to another couple and moved to Jonesboro, Arkansas, to pastor Trinity Church. When they got to Arkansas, they picked up where they left off in Texas.

The church members quickly grabbed hold of what Chad was teaching. In fact, when they were looking for a pastor, one of the things they wanted to see in church services was miracles.

The twentysomethings in Trinity are grabbing hold of the miraculous. They're boldly praying for the sick and are seeing people healed.

Two brothers who grew up in a denominational church started attending Trinity Church. They came to Trinity because they were hungry to know more about the baptism in the Holy Spirit. They also learned about God's healing power and soon began acting on the Word. A young woman at the young adult Bible study had a leg that was shorter than her other leg. One of the brothers boldly commanded it to grow, and her leg shot out!

Chad's greatest joy is seeing believers replicate the works of Jesus in their everyday lives. He wants the supernatural to become natural in the church. The Gonzaleses have a sincere desire to see people come to know who they are in Christ and live the victorious life God has provided for them. Emphasizing one's identity in Christ and the miraculous power of God, they continue their mission to help people win in life through Jesus Christ.

Chad and Lacy have a weekly television program called Winning in Life, which reaches over a million people. As a way to help believers who are crying out to experience God and the supernatural, Chad recently started The Supernatural Life Podcast. In addition, Chad has authored nine books, his latest is Naturally Supernatural.

Chad has been spreading the message of who you are in Christ in churches across the U.S. and abroad. When believers really understand their union with Christ, they are set free from the sickness that binds them. More and more, people are healed while they hear the Word taught without hands being laid on them.

Chad is committed to seeing the supernatural, not just for himself but also for the masses. It's his goal to help Christians grow in their connection with God so they can manifest God to the world.

To learn more about Chad and Lacy Gonzales visit chadgonzales.com.

More revelation about walking in the supernatural

A greater sensitivity to hearing the voice of the Holy Spirit.