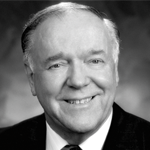 FROM MY EXPERIENCE of almost 70 years of preaching faith, I've concluded that more people fail when it comes to faith for finances than anything else.

That's because they're trying to exercise faith but haven't sown any seed! They want God to bless their finances even though they haven't planted anything. Even so, it's amazing how He'll have mercy on them and help them.

The Bible states, "Give, and it shall be given unto you; good measure, pressed down, and shaken together, and running over, shall men give into your bosom. For with the same measure that ye mete withal it shall be measured to you again" (Luke 6:38).

We can't reap a crop without sowing seed. We can't say, "I'm going in the backyard to pick tomatoes" if the ground hasn't been prepared and the seed sown.

We can receive finances through two principal methods:

1. BELIEVING AND OBEYING THE BIBLE.

2. A SUPERNATURAL MANIFESTATION OF THE HOLY SPIRIT.

An example of the second method was the widow in the Old Testament story found in First Kings chapter 17. Her cruse of oil kept pouring oil, and her meal barrel kept giving meal—which was just as good as money in those days. That was a supernatural manifestation. Supernatural manifestations often occur for us in the area of finances because we have obeyed God and have sown seed.

The first step toward getting our financial needs met is to obey the Bible. God said to Israel:

MALACHI 3:10
10 Bring ye all the tithes into the storehouse, that there may be meat in mine house, and prove me now herewith, saith the Lord of hosts, if I will not open you the windows of heaven, and pour you out a blessing, that there shall not be room enough to receive it.

God said we were to bring our tithes into the storehouses, and He would open up the windows of heaven. "Prove me now herewith," He said.

Obedience is the key to receiving from God. If we'll learn to hear God's voice and obey Him in the area of our personal finances, it will open the door to further blessings in our own lives and will pave the way for Him to use us in greater ways to bless mankind.

[Editor's Note: This article was adapted from the minibook Obedience in Finances by Kenneth E. Hagin.]

"Put Your Faith in Neutral"
Kenneth and Brenda Moore, long-time members of Rhema Bible Church, believe that God will do what He says. And God promised to supply our needs according to His riches in glory by Christ Jesus (Phil. 4:19). So when the couple's income wasn't where it needed it to be, they asked God to increase their finances not once, but three times. God answered every time!

During a Sunday morning church service, Kenneth said to his wife, "I want you to put your faith in neutral. I'm believing God for $200 over and above my current salary." They faithfully tithed according to Malachi 3:10 and gave monetary offerings. Within a month, Kenneth received a raise for $200. God was faithful to His Word.

The Moores went to the Lord in prayer again. This time, they asked God to increase Kenneth's salary by $500. A month later he received another raise for $500.

Excited to see God answering their prayers, they then asked for an $800 increase. The Lord answered again and they were overjoyed! God proved that He is faithful to His Word when you steadfastly stand in faith.