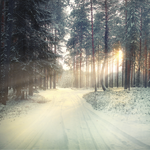 WHATEVER YOUR AGE, vocation, or location, there's a time and season for everything. Ecclesiastes 3:1 (NKJV) says, "To everything there is a season, a time for every purpose under heaven."

22 While the earth remains, seedtime and harvest, cold and heat, winter and summer, and day and night shall not cease.

God has set things up to revolve around times and seasons, and this pattern is going to remain as long as you're on the earth. There is value in every season, as well as appropriate actions to be taken and actions to be avoided. In the spring, you plant crops that you want to harvest in the fall. In the winter, you don't go swimming; you go skiing. In the summer, you don't wear a fur coat; you wear light clothing so you can stay cool.

Spiritually speaking, there are times in life when you plan and dream. At other times, you prepare and get yourself ready for what God is bringing you next. Sometimes, you cultivate what you already have, appreciate it, and stay with what you are and what you're doing. And in some seasons, you get the harvest of your labor.

Don't Hate the Season You're In

In life, seasons happen in sequence. We have winter, then spring, then summer, and then fall. As a person, you were a baby, then a child, then a teenager, and finally an adult. There is a reason these seasons happen as they do. Yet, some people become unhappy with where they are. They want to skip ahead to the final season. And as a result, they fail to see the value in their current season. If you don't see the value of where you are right now, you will never make it to what God has planned for you next.

Looking back on my life, I did not understand all of the seasons I was in when they were happening. I went through a sequence of seasons. First, I grew up in a minister's home. Second, I was a student. Then I had the military season, followed by the associate pastor season. Then I was crusade director with no preaching responsibilities, followed by being an evangelist.

Going through those seasons enabled me to be where I am today as president of Rhema Bible Training College, pastor of Rhema Bible Church, and CEO of Kenneth Hagin Ministries. If I had not successfully navigated those times, I would not be here now. Most of us can look back and see now that God led us through many different seasons to where we are. So, wherever you are right now, learn everything you can, because God is preparing you to use it in the future.

Like Jesus, the Apostle Paul followed the Holy Spirit's leadings as he moved through the seasons of his life. At one point, the Holy Spirit told him not to go to Asia Minor to preach the Gospel (Acts 16:6). Instead, he was called at that time to go to Macedonia. Later, at the right time, the Holy Spirit opened the door to Asia for him.

8 And he went into the synagogue and spoke boldly for three months, reasoning and persuading concerning the things of the kingdom of God.

9 But when some were hardened and did not believe, but spoke evil of the Way before the multitude, he departed from them and withdrew the disciples, reasoning daily in the school of Tyrannus.

10 And this continued for two years, so that all who dwelt in Asia heard the word of the Lord Jesus, both Jews and Greeks.

The Holy Spirit knows when we are ready for the next season. So, don't try to get into the next season before you're ready. Ecclesiastes 3:11 (NKJV) says, "He has made everything beautiful in its time." God has made a time for every flower to bloom, every tree to bear fruit, and every crop to be harvested. And it's the same with us. We bloom in God's perfect time!

I have seen some people who are like shooting stars. They have a momentary display of talent or ability in their life, and then they fade out. I believe it's because God wanted them to be able to do some things, but they jumped out too fast, too quick, and they didn't last because they weren't ready for it.

God may be calling you to minister or to some other calling in life. But until you go through times of learning and preparation, you're not going to come into the fullness of that calling. And let me tell you—once you get there, you still go through seasons, because if you don't, you won't progress.

Commit to Be Satisfied in Your Current Season

Today is the day that God has made. This is the day for you to say, "I'm going to be satisfied in the season that I am in. I'm going to look for opportunities to learn. I'll take the assignments God gives me in this season so that I can accomplish all I'm called to do. And I will see myself prosperous in the natural, and in the supernatural."