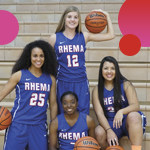 AT ONE PARTICULAR GAME during the 2015–2016 Lady Eagles basketball season, a disgruntled fan shouted loudly from the bleachers the whole time. Afterward, some of the Rhema ladies talked about how distracting he was.

One player never heard him. It's not that she never hears what people yell from the sidelines. But as she put it, "When I'm playing a game, the only voice I hear from the bleachers is my dad's."

Another player echoed her comment. "I hear my dad way more than I hear my coach. It's like you have an instinctive ear for your father."

A father's impact on his daughter's life should never be underestimated. His involvement in her life affects how she sees herself, how well she does in school and beyond, and how she forms relationships with other people—especially men.

There's no doubt that the Lady Eagles' dads have had a huge impact on their daughters' success on the court. One dad instilled in his daughter how to be tough. Today, anytime she gets knocked down, tough grit kicks in. No matter how badly she's hurting, she never shows the pain. She's quickly back on her feet as if nothing happened.

Another dad taught his daughter to never quit. She always finishes what she starts. Both on and off the court, she never does anything halfway and never considers giving less than a hundred percent.

Another Lady Eagle learned teamwork from her dad. It's automatic for her to pick up the slack when someone else isn't carrying her share of the load.

Long hours of training started early for many of the Lady Eagles, with Dad taking on the role of coach and personal trainer. As a teen, one girl was up at 6 a.m. every Saturday to work out. Then she headed out to run the paths her dad had mowed up and down the huge hills covering their 60 acres.

Did she hate the training? You bet. But as an adult, she's had a change of heart. "I thank my dad for making us do the hard things," she said. "I feel like I was more prepared for those workouts going into college than a lot of the other incoming freshmen."

One Lady Eagle is the daughter of a girls' basketball coach. She had no choice but to play the game. She recalls affectionately how she and her dad played one-on-one. "Of course, he beat me every time. He never took it easy on me. He'd say, 'This is how you get better.' Finally, I beat him one day! I loved every moment of it!"

On the way home after games, he would point out different plays. "That one move you had," he'd say, "it was nice." But he would also mention areas needing improvement. As this Lady Eagle said of her dad, "He was my biggest critic, but he was also my biggest supporter."

He Was Always There

Even though their dads could be tough, some of the Lady Eagles couldn't imagine life without them. "I've always been Daddy's girl my whole life," said one Lady Eagle. "The majority of my friends—their parents are either divorced or they didn't really know their dad.

"But I couldn't imagine life without my dad, because he's always been there. I've never had to go without someone supporting me. Seeing a lot of my friends and the decisions they've made, I knew it was because they didn't have a dad. They would look for love in all the wrong places. It made me realize how vital my dad has been in my life."

Another Lady Eagle said that her father has impacted her beyond measure. "My dad is so wise," she said. "I soak up everything he has to say, how he carries himself, and what he does. I want to grasp as much from my father as I can. I've seen what our family has gone through and how he's handled it. It's made me realize how strong he is. My dad—yeah, I'd do anything for him."

Not all of the Lady Eagles had their fathers around. Some were raised by their moms. Their relationship with their dad wasn't developed until they were young adults.

While growing up, one girl was mad that her dad wasn't there. "I was really hurt," she said. "But now, forgiveness has come. It's just good. None of those old feelings are there. It's almost like I don't remember it."

Another Lady Eagle admitted to being the one to initiate conversations with her dad. "I'm building that relationship," she said. "Still keeping him a part, and not separating."

Her efforts have paid off and the relationship is being restored. Many of their phone conversations end with them recalling a brief period when her dad was around. As a youngster, she had a toy lion. She would sit on it and roar. Now, before hanging up the phone, her dad often says, "Roar for me one more time."

"I know how it was not to have a father in your life while growing up," says a Lady Eagle. "Now that my dad's here, he's been such a great father. He's my biggest supporter and biggest encourager in everything I do. Not just in sports, but in everything in life. To go from knowing what it's like not having that, and now having it, I would never want to go back to not having my dad around."

No family unit is perfect. There are always situations when relationships can become strained. The Lady Eagles are good examples of how showing love and forgiveness can triumph over such difficulties. As one Lady Eagle said, "I'm not giving up on the relationships God has given me. Never."

Demonstrating love and forgiveness has made a huge impact. Not only have some of the girls' relationships with their fathers been restored, but relationships with their mothers and siblings have improved too. And what better reward while preparing for ministry and chasing basketball championships than to see the lives of family members get turned around and become right with God!

CALL SOMEONE
Dads, call your daughters. Daughters, call your dads—regardless of the last time you talked. Let them know how much you love them. It will mean more to them than you may realize. Then let us know what your dad or daughter means to you. Share it on Facebook or email us.