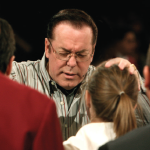 God was the Healer in both the Old and New Testaments. He is still the Healer today. Here are a few testimonies from people who have experienced Jesus as their Healer!

"Through Kenneth E. Hagin's teachings, I learned how to believe God when I had no hope, strung out on methadone, heroin, and other narcotics for over 20 years. I am free today." // Gary

"At the end of October, I had a mole removed from my arm. The biopsy came back as melanoma cancer. The doctor said it was Stage 3, rapidly progressing to Stage 4. A scan showed that it was already in a lymph node. The doctor said it was too deep to cut it all out. He estimated that I would need at least five sessions of radiation.
"By the third session, I went in for a scan. And glory to God, the cancer was completely gone! The doctor said it doesn't even look like I had cancer!" // Miranda

"I want to praise God. Four months ago I wrote a prayer request for myself and my pill addiction. I stand this day 122 days sober. Thank you, God!" // Matthew

"First, let me say what a blessing you are to us inmates. We have grown in the Lord. Your ministry has made such a difference on this campus.

"There is a lady here who does not believe in God. Two months ago she was told she was covered with cancer from head to toe and had three months to live. Some of the women here asked if we could pray with her. She said, 'What for? There is no God. But if you want to, go ahead.'

"So three of my dear sisters and I prayed for her. When she went back to the doctor, he said, 'I can't explain it, but all the cancer that showed up on the MRI, bone scans, and blood tests is gone.' As a result of being healed, this lady came to the Lord.

"I want to share that it was through your ministry that we learned how to walk by faith, operate in the spiritual gifts, and walk in our calling. Thank you so much. All of the books you send get used and shared with all the women." // A Woman Inmate

A gentleman who had been a Satanist for 30 years responded to Kenneth W. Hagin's altar call. He said he wanted to give it all up—all of his demonic practices. He was also baptized in the Holy Spirit and spoke with other tongues!

On Wednesday night of the Living Faith Crusade, Rev. Hagin had a special altar call for people with chest problems. A man who had been diagnosed with cancer went forward because he was having trouble breathing. Rev. Hagin laid hands on him. The next day the man went to the hospital for a scheduled radiation treatment. The doctor was confused and said, "This can't be right." They could see that the cancer was deteriorating. Then, on Friday night of the crusade, this man was baptized in the Holy Spirit.

TELL US!
Hey! Let us know if you've been healed through this ministry! We'd love to hear your testimony. Just share it on Facebook or email.
fb.com/kennethhaginministries
PartnerService@rhema.org