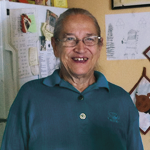 On a dreary winter day in December of 1993, Carol Taylor and her husband, Jay, were driving through New Mexico's exquisitely beautiful Jemez Valley. The area draws its name from the Jemez Pueblo tribe, its earliest-known inhabitants. The Taylors were at a crossroads in their lives and were looking for a new place to call home.

The meandering, two-lane State Highway 4 took the Taylors past stunning red rock formations and 1,200-foot mesas towering over the road. Around every bend, the landscape became more breathtaking.

Through a series of God-ordained events, Carol and Jay began operating a popular general store where they sold groceries and camping supplies. The Taylors found that a lot of the Jemez Pueblo Native Americans didn't have cash for groceries, so they began accepting pottery, sculpture, painting, and jewelry in trade for credit.

Carol gave them credit even when it wasn't good business. "I would always rather take a loss to make sure a family had food than to take a chance on them not having food," she said. "I was sowing into them before I understood what I was doing. And that has turned out to be an awesome thing."

It's common for Native Americans on reservations to be cautious with outsiders. The Jemez Pueblo are a particularly closed society, and as a rule they don't talk openly to you except about a business transaction. It's rare for them to share their deepest thoughts, hurts, or aspirations with those outside the tribe. But during the 12 years the Taylors ran the general store, some Jemez, very slowly, began to open up to Carol. Little did she know that the small act of extending credit would set her up for later ministry.

As Carol shared with and ministered to different people in the valley, the call on her life began to stir. She and Jay started reading their Bibles. Before long, they turned the store over to an employee and headed for Broken Arrow to attend Rhema Bible Training College. They completed their first year in 2007, and Carol graduated in 2008. But poor health kept Jay from finishing school, and in 2010 he passed away.

After Jay passed, Carol returned to the Jemez Valley. She began working with a Native American woman who lives in California but whose ancestry is Jemez. Carol's assignment from the Lord was to help create a platform for the woman to minister whenever she was in New Mexico.

The Gathering
Carol began holding monthly meetings she called "The Gathering." They are open to anyone. Native Americans attend, along with others from different denominational backgrounds. Carol has been pouring everything she learned at Rhema into everyone who comes. She wants to build them up in the Word and in who they are in Christ.

After one Bible study that included teaching on Christ the Healer, Barbie—a woman young in the Lord from a denominational church—asked for prayer for a detached retina. She also needed someone to take her to have her eye checked once more before surgery.

Carol laid hands on Barbie, prayed for her healing, and volunteered to take her to the doctor. And she encouraged Barbie to trust God to heal her eye.

On the way to the doctor's office, Carol could tell Barbie was nervous. The young Christian was doing her best to step out in faith. Once they arrived, Barbie was in the exam room for a long time. When she finally returned to the lobby, she excitedly proclaimed, "It's already reattached! The doctor said it looks so good that I don't have to come back for a year! It really worked!"

Christmas Shoeboxes
In 2011 Carol was contacted by Jeanne Orrison, an RBTC instructor and a teacher of one of Rhema Bible Church's adult Sunday school classes. Each year the class sends out Christmas shoeboxes for children. Jeanne asked Carol if she knew of Jemez Pueblo children who would benefit from receiving the shoeboxes.

Carol's answer? A resounding "Yes!" Many Jemez Pueblo mothers struggle just to feed their kids, let alone provide gifts. This was an answer to prayer!

The class sent 70 shoeboxes and a church in Albuquerque supplied another 15. Carol also received hats, mittens, scarves, and lap throws from others who heard about the project. She and helpers wrapped several hundred extra gifts for the parents, grandparents, and older siblings who brought the children. No one would leave empty-handed!

Passing out Christmas shoeboxes is an all-day event. Parents are told to bring the children at designated times. When they arrive, Carol tells the kids—with those who brought them listening—a story interwoven with the Gospel. Then everyone receives a shoebox or present, cookies, and other treats. Several other Rhema grads have pitched in to help. And a generous Jemez family hosts the party.

For some reservation families, the Christmas shoeboxes are the only gifts their children receive. The shoeboxes have helped Carol make new friends, strengthen existing relationships, and develop trust among the Jemez people. Because of the shoebox program, some families are less afraid to interact with Bible-believing Christians.

Proclaiming a Highway for the Lord
With its dramatic skies and beautiful landscapes, the Jemez Valley attracts many visitors. It also draws New Agers and Wicca. There's a flavor of just about every kind of spiritual activity there. So much witchcraft is practiced that some have called it one of the darkest places spiritually in the U.S. It was once a haven for pedophiles.

The Lord has repeatedly led Carol to blow the shofar and proclaim a highway for Him through the wilderness (Isa. 40:3). To do this, she starts at the top of the historic Jemez tribal land—9,000-foot-high Mount Redondo in the breathtakingly beautiful Valles Caldera. Carol makes several stops on the way down the mountain and decrees that God's glory will manifest throughout the Jemez Valley. Today, she says, you can sense a shift in the spiritual atmosphere there.

Carol's calling to the Jemez Pueblo fits her like a glove. There's nothing she would rather be doing. Although her husband is not walking with her on this leg of her earthly journey, Carol knows he is cheering her on from above, standing among that "great cloud of witnesses."

Prayer Focus
The Bible in the Towa dialect spoken by the Jemez Pueblo. (The Tribal Council has forbidden the language to be written. However, a CD has been recorded with scripture songs in Towa. Pray for these truths to be sung into people's hearts.)