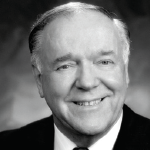 The Apostle Paul instructed Timothy, his son in the faith, on how to pray for those in authority. He said, "I exhort therefore, that, first of all, supplications, prayers, intercessions, and giving of thanks, be made for all men; for kings, and for all that are in authority; that we may lead a quiet and peaceable life in all godliness and honesty" (1 Tim. 2:1–2).

Notice that Paul wrote, "first of all." Too often we put ourselves first in our praying, and sometimes that is as far as we ever get in prayer. In other words, most of the time we are just praying selfishly for ourselves or about our own personal lives and needs.

Why did Paul want Christians to pray this way? Because whatever happens in the nation in which we live is going to affect all of us. Paul told us why we are to pray for our leaders: "that we may lead a quiet and peaceable life in all godliness and honesty."

God is concerned about us. And He will change things in the nation in which we live because we ask Him to. Whether or not our government leaders are Christians, God will do some things for our sake.

Changing a Nation
I was greatly moved some years ago to have two seminars in the summer on the subject of prayer. I was strongly impressed to do some praying for America—particularly about some things the Lord had shown me years before concerning the nation's government and world events.

Many times prophecies are conditional. In the case of world events, for example, prophecies of God's judgment don't always have to come to pass. They can be averted if the people involved will repent. You can see that illustrated in the Bible in Isaiah chapter 38, for example.

God had sent the prophet Isaiah to King Hezekiah to tell him, "Set thine house in order: for thou shalt die, and not live" (Isa. 38:1). But as it is recorded, Hezekiah didn't die.

When Hezekiah turned his face to the wall and prayed, the Lord said to Isaiah, "Go, and say to Hezekiah, Thus saith the Lord, the God of David thy father, I have heard thy prayer, I have seen thy tears: behold, I will add unto thy days fifteen years" (Isa. 38:5).

Prayer Points
Make it a point to pray for those in authority in your nation this year. Pray for these people: