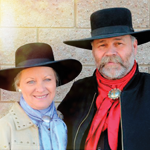 The rugged wilderness of northeastern Nevada offers crystalline lakes, majestic mountains, and spectacular scenery. It's a place where the morning silence is broken by chirping birds, buzzing flies, and lowing cattle. It's also the place Bo Lowe, a 1994 Rhema Bible Training College grad, and his wife, Cathy, call home.

In the summer of ’92, after seriously seeking the Lord, Bo had an encounter with Him on a lonely
dirt road. Bo had loaded salt blocks for livestock in the back of his truck and was headed down the dusty road with a broken heart. He thought God didn’t care about him enough to talk to him the way He spoke to others.

Tears welled up and Bo couldn't see to drive. He had to pull over. He reached for his Bible and it fell open to Psalm 32. There he read, "I will lead you and guide you. I'll watch over you. Do not be like the horse or the mule that have no understanding" (vv. 8–9).

Bo worked with horses and mules. He knew God had spoken specifically to him and given him direction for his life. And at that moment he also knew he was supposed to go to Rhema Bible Training College.

Shortly before Rhema classes began that fall, Bo and Cathy sold their milk cow to help with expenses, hitched up the horse trailer, and loaded up their possessions. Leaving the pristine countryside behind, they made the 1,500-mile cross-country trip to Broken Arrow.

For Bo, moving to Oklahoma was like moving to a foreign country. He loved the rugged ranch life. He, Cathy, and their daughter Shawna lived in cow camps and followed the cattle as they grazed on the wide-open mountain ranges.

The Rhema brochure Bo received said the school's campus covered 80 acres. With a Nevada buckaroo mindset, Bo thought they could just set up camp on the back side of Rhema's property and live there while he went to school. They even brought their horse so he could ride to class!

When the Lowes arrived at Rhema's suburban Tulsa campus, Bo's first thought was "Oh, no! What have I done?" Then he asked Cathy, "Now what do we do?"

Divine Connection
Discouraged, the Lowes stopped at a nearby gas station and Cathy used a pay phone to call the only contact they had. When a recording told her the number had been disconnected, her heart sank. But before she hung up, they heard a man behind them ask, "Are you Bo and Cathy Lowe?"

The man—the son of a Nevada buckaroo they had once met—happened to be driving by, saw their flat-brimmed buckaroo hats, and knew they had to be from Nevada. So instead of pitching their wall tent on Rhema's back 40, Bo, Cathy, and Shawna set up camp on the man's property until they got an RV. And he had pasture for their horse.

Send Me Anywhere, but Please Not Nevada!
While Bo attended Rhema, he often told the Lord he would go anywhere—even Africa. The one place he didn't want to go was back to Nevada, because "they know who I am there."
The buckaroo culture is unique. These men and women think and live differently from city folks. But by the time Bo graduated, he knew he and Cathy had to go back to Nevada!

Raising Up Sick Animals
"I never had any intention of preaching," says Bo. "I just thought I'd go back and work on the ranch. If someone asked me about Jesus, I could tell them. That was my whole plan."

The Lowes fell right back into ranch work. They started noticing animals that needed to be healed. No one told them they couldn't pray for animals, so they prayed for cows, horses, sheep, cats, dogs . . . you name it, and they prayed for it. And the animals were healed!

One time a cow had a difficult time giving birth and the calf had to be pulled out. As a result of the rough delivery, the cow became paralyzed. She couldn't get up and was lying flat on her side. Bo and Cathy laid hands on her, and about two weeks later she was up and walking—totally healed!

In another instance, a blind sheep named Priscilla received her sight after prayer. Then she was badly kicked by a horse. She was paralyzed, had a broken leg, and was bleeding from her mouth. After the Lowes prayed for her, she completely recovered within two weeks.

Some time later their ranch manager, who had witnessed these healings, had a stroke and became paralyzed on one side. He had never been open to the Gospel. But when Bo and Cathy visited him in the hospital, he grabbed Cathy's hand and said, "I want what Priscilla got." The Lowes laid hands on him, and he later returned to the ranch without any paralysis!

Going to the Remote Places
There are very few churches in northeastern Nevada. Before Bo and Cathy came to Rhema, they drove three hours one way to attend church once a month!

God began dealing with the Lowes to bring the Word to ranch hands and people in small, remote Nevada towns. They decided to start in the mining town of Jarbidge.

When they got there, they learned that the town was going to hold a street festival called "Jarbidge Days." Vendors could buy space along the dirt road—the only road—that ran through town. Bo wanted to set up their wall tent as a church. But he was told that first he had to talk to Jack.

The Lowes found Jack at the bar in the Tired Devil
Saloon. Bo said to him, "I'm a preacher of the Gospel of Jesus Christ. I want to buy some street space to set up a tent and have cowboy church Sunday morning."

"You can set up right out there," said Jack.
"How much do we owe you?"
"Nothing," Jack replied. "You can't charge God."
The Lowes set up their tent during the festival and around 30 people showed up. That may sound like a small crowd, but at a later Sunday service, everyone who lived in Jarbidge except two people came to church!

Circuit Cowboy Preachers
The Lowes' outreach to small northern Nevada towns has expanded. Every week they travel to a different place to bring the Gospel to ranch communities. Their services are geared to ranch families and workers, which means church starts later in the morning so people can feed the animals and finish chores.

From their home in Jackpot (pop. 1,195), Bo and Cathy can drive to Jarbidge in two hours. The last Sunday of the month they make a 2 1/2-hour trek to Starr Valley. And twice a month they drive 4 1/2 hours to Owyhee (pop. 953) to hold services on the Duck Valley Indian Reservation, the most remote reservation in the U.S.

The Lowes don't plan to stop what they're doing. "I always tell people, 'I'm not a pastor. I'm all you have till one gets here,' " says Bo. "But it doesn't seem like anybody is coming."

Bo and Cathy are happy to crisscross northern Nevada to minister in these out-of-the-way places. God cares deeply for these people, and the Lowes are committed to bringing the Gospel to them.

Prayer Focus
Direction for the next step

To learn more about Bo and Cathy Lowe and their ministry, Morning Star Outfitters, Inc., email msoranch@filertel.com. Or call (775) 755-2132.