When we understand how faith comes, acting on our faith and receiving from God becomes simple. God made faith easy to understand—the answers are all in the Word!

But without faith it is impossible to please him: for he that cometh to God must believe that he is, and that he is a rewarder of them that diligently seek him. —Hebrews 11:6

Notice particularly the first part of that verse, “But without faith it is impossible to please him. . . .”

If God demands that we have faith when it is impossible for us to have faith, then we have a right to challenge His justice. But if He places within our hands the means whereby faith can be produced, then the responsibility rests with us as to whether or not we have faith.

ROMANS 10:17
17 So then faith cometh by hearing, and hearing by the word of God.

If we don’t have faith, it is not God’s fault. To blame God for our lack of faith is nothing but ignorance. God has provided the way whereby everyone can have faith.

The Apostle Paul said that we are saved by faith (Eph. 2:8). But how do you get the faith to be saved? Faith for salvation “. . .cometh by hearing, and hearing by the word of God.”  Let’s read more from this passage in Romans.

ROMANS 10:8–10,13–14,17
8 But what saith it? The word is nigh thee, even in thy mouth, and in thy heart: that is, the word of faith, which we preach;
9 That if thou shalt confess with thy mouth the Lord Jesus, and shalt believe in thine heart that God hath raised him from the dead, thou shalt be saved.
10 For with the heart man believeth unto righteousness; and with the mouth confession is made unto salvation . . .
13 For whosoever shall call upon the name of the Lord shall be saved.
14 How then shall they call on him in whom they have not believed? And how shall they believe in him of whom they have not heard? And how shall they hear without a preacher? . . .
17 So then faith cometh by hearing, and hearing by the word of God.

We see here that faith for salvation comes by hearing the Word of God. Now relate that with Acts 11:13 and14, which says, “And he shewed us how he [Cornelius] had seen an angel in his house, which stood and said unto him, Send men to Joppa, and call for Simon, whose surname is Peter; WHO SHALL TELL THEE WORDS, whereby thou and all thy house shall be saved.”

God told Cornelius to send for Peter in order to learn the plan of salvation. The angel could not preach to Cornelius. (Angels cannot preach—God sent men to preach.) But the angel could tell Cornelius where to go to get someone “. . .who shall tell thee words, whereby thou and all thy house shall be saved.”

How does faith for healing come? In the same way faith for salvation comes—by hearing and believing God’s Word.

ACTS 14:7–10
7 And there they [Paul and Barnabas] preached the gospel.
8 And there sat a certain man at Lystra, impotent in his feet, being a cripple from his mother’s womb, who never had walked:
9 The same heard Paul speak: who stedfastly beholding him, and perceiving that he had faith to be healed,
10 Said with a loud voice, Stand upright on thy feet. And he leaped and walked.

A casual reader of the Word might say, “Isn’t it wonderful how Paul healed that man!” But Paul did not heal the man. The man was not healed because Paul was an apostle, nor was he healed by Paul’s faith. The man himself had faith.

This crippled man at Lystra had faith to be healed. In Mark 5:34, Jesus said to the woman who had just been healed of the issue of blood, “ . . . Daughter, thy FAITH hath made thee whole. . . .” Faith has not been done away with. It still comes by hearing — and hearing by the Word of God! 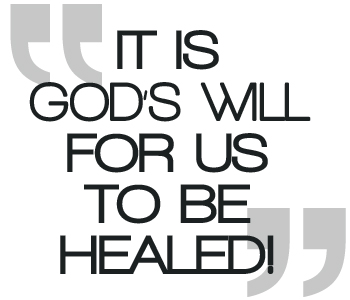 Jesus did not say that it was His power that made the woman whole; He said that her faith did it. How did the man at Lystra get faith to be healed? From what he heard, and what he heard was the Word of God.

Is there something about the Gospel that would cause a life-long cripple to be healed? Decidedly, yes!

Paul preached a Gospel of salvation and of healing, stating, “For I am not ashamed of the gospel of Christ: for it is the power of God unto salvation to every one that believeth; to the Jew first, and also to the Greek” (Rom. 1:16).

In his notes referring to this verse, Rev. C. I. Scofield wrote, “The Hebrew and Greek words for salvation imply the ideas of deliverance, safety, preservation, healing, and soundness.” Therefore, Paul was saying, “I am not ashamed of the Gospel of Christ. It is the power of God unto deliverance, safety, preservation, healing, and soundness.” Paul preached the full Gospel, not just a part of it.

I referred earlier to the woman who had an issue of blood for twelve years. The Word of God tells us about her in Mark chapter 5 as well as in Luke chapter 8. We are told that she had spent all of her living and had gone to many physicians, but “was nothing bettered, but rather grew worse” (Mark 5:26).

Mark 5:27 and 28 say, “When she had HEARD of Jesus, came in the press behind, and touched his garment. For she said, If I may touch but his clothes, I shall be whole.” And in verse 34 we read, “And he said unto her, Daughter, thy faith hath made thee whole; go in peace, and be whole of thy plague.”

After preaching several weeks in a Full Gospel church in Dallas during the early 1950s, I stayed on three months while the pastor took a leave of absence. In addition to preaching at the regular church services, we also had a daily radio program.

One weekend we had some special missionary services. On Friday night, after the services had been dismissed, one of the ushers told me that a man and a woman from Fort Worth wanted to see me. The wife was sick and wanted healing. Her husband related that as he drove to work one morning, he had heard our radio program. He had heard me make the statement that healing was for everybody, and he had gone home that night and told his wife about it. All that week they had tuned into the broadcast.

This woman had had two serious operations and was facing the third. “We have been praying,” the husband said, “that if it is God’s will for her to be healed, He will give us the faith to believe that she will be healed.” And they had come to ask me to pray for her.

I began by telling them it is unscriptural to pray, “If it be Thy will” concerning anything which God’s Word has already promised us. When you put an “if” in your prayer, you are praying in doubt.

Some people think they are being humble when, really, they are being ignorant. You will get no answer if you put “ifs” in your prayers when God’s Word has already made His will plain.

I asked the husband, “If the New Testament said that Jesus took your wife’s infirmities and bare her sicknesses, wouldn’t it be His will for her to have her healing?”

He acknowledged that it would. So we turned in the Word to Matthew 8:17, which says, “That it might be fulfilled which was spoken by Esaias the prophet, saying, Himself took our infirmities, and bare our sicknesses.”

“It is God’s will for her to be healed!” he exclaimed. His wife said that she saw it too.

We then turned to First Peter 2:24 and read, “Who his own self bare our sins in his own body on the tree, that we, being dead to sins, should live unto righteousness: BY WHOSE STRIPES YE WERE HEALED” (1 Peter 2:24).

And in Isaiah 53:4 and 5 we read together, “Surely he hath borne our GRIEFS, and carried our SORROWS,: yet we did esteem him stricken, smitten of God, and afflicted. But he was wounded for our transgressions, he was bruised for our iniquities: the chastisement of our peace was upon him; and WITH HIS STRIPES WE ARE HEALED.” The margin of the King James Version reads, “Surely he hath borne our sicknesses and carried our diseases.”

So the couple said, “We know it is His will. All we need now is faith.”

I asked them if they were saved, and they replied that they were. I asked them to describe how they had gotten saved. They stated that they had gone down to the front of the church when an invitation was given and had knelt and prayed a sinner’s prayer.

“When you went down to the front,” I asked, “did you ask the Lord to give you faith to be saved?” Their answer was no.

The husband said that the preacher had preached that they could be saved. He had read the Word to the people. They had heard the Word, and faith came to them for salvation.

I told them that faith for healing came the same way. They had just heard the Word read to them, and they believed what it said concerning healing. They had faith to be healed!

“We’re going to have to throw our first prayer away because it wasn’t any good,” the husband declared. I agreed with him. As soon as light comes from God’s Word, faith is there!

His wife agreed, too, saying, “I see that all I have to do now is to accept Jesus as my Healer.”

I laid my hand on her head and prayed. Then I asked her if she was healed.

She confessed, “I surely am, and I know I am because God’s Word says I am.” 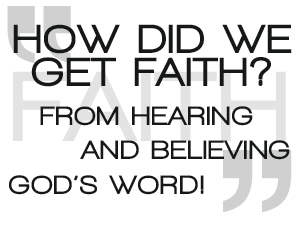 During the following Sunday night service, the vestibule doors swung open and there stood this woman’s husband. After asking if he could say a word, he began to tell what had happened.

He said that when they arrived home that Friday night, his wife pulled off her brace, threw it into the closet and said, “Thank God, I am healed!” The next day, Saturday, when he came home, he found his wife stooped over the sink, washing her hair—something she had been unable to do.

This Sunday night, he brought his mother to be prayed for. She was in a wheelchair with paralysis. After prayer, she stood up and walked out!

When hands were laid on the young couple, they received the baptism in the Holy Spirit and began to speak in tongues. Years later, I talked with them and she was still healed.

How did she get faith? From hearing and believing God’s Word!