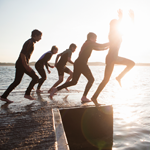 Water parks are always fun. With the water slides, tube rides, and splash pools, there's something for everyone to enjoy. It's fun watching people around the wave pool. They can be lying by the pool soaking up the sun. But when the bell goes off signaling the next wave, they'll quickly jump up and run into the pool.

This reminds me of a story recorded in John chapter 5. It's also about a pool—the Pool of Bethesda. Scripture tells us that a multitude of sick people were lying on the five porches surrounding the pool. There was no bell to give them warning, but every so often an angel stirred the water. And the first person to get into the pool was healed of whatever disease he had. (See John 5:1–15 NKJV.)

A man who had been sick for 38 years was lying by the Pool of Bethesda. One day Jesus showed up and asked him, "Do you want to be made well?" (v. 6.)

When you really think about it, that seems like an odd question. Why else would the man be lying there? Of course he wanted to be well. But instead of saying, "Yes, I want to be healed," he replied, "Sir, I have no man to put me into the pool" (v. 7).

From his answer we can see that the sick man wasn't looking to God for his healing. He was looking for a man to help him. Really, he was just coming up with an excuse.
Jesus didn't pay any attention to the man's excuse. Basically He said, "Get up and walk" (v. 8), and the man did.
Scripture doesn't say that Jesus laid His hands on his head. The man didn't make any faith confessions. He didn't fast for 40 days and nights. He just acted on what Jesus said.

What's Your Excuse?
The story of the man at the Pool of Bethesda parallels what is happening in people's lives today. Instead of standing in faith and confessing the Word of God for themselves, they are waiting on others to help them.

They want their pastor to pray for them. Or they'll call every prayer line across the country hoping that someone will pray just the right prayer to get their needs met. Sometimes it seems like everyone is praying except them!

We must learn that our needs aren't met by counting on somebody else to pray and stand in faith for us. We can ask what we will and it shall be done for us when we pray (John 15:7).
Christians today are not in the same situation as the man by the Pool of Bethesda. We're not stuck on the side of the pool waiting for a special manifestation. We have the Word of God.
Our days of excuses are over. We can't ever say, "I don't have a man to help me." We do have a man. His name is Jesus Christ.

Through Jesus' death on the cross, burial, and resurrection, we've been set free from the devil's grip. Jesus said, "I have come that they may have life, and that they may have it more abundantly" (John 10:10 NKJV). Jesus didn't die on the cross so we could have an abundant life in one area but not in another area. We can experience an abundant life financially, physically, spiritually, emotionally, and mentally—in every area of our lives.

God gave us His Word to act on. And just like the man at the Pool of Bethesda, we need to act on that Word and get up. So let's be doers of the Word. We've been given everything we need to succeed.

The same Spirit that raised Christ from the dead dwells in us. Everywhere we walk, we take "the Man," the mighty Holy Spirit, with us. He's our Counselor, our Advocate, and our Healer. He helps us in any situation we are in. We may make some really stupid choices that land us in bad places. Even so, there's nothing we can get ourselves into that God can't take care of. Nothing can separate us from His love.

Quit waiting around for the water to move, and drop the excuses. It's time to decide that enough is enough and to start acting on God's Word. It's time to get up and move forward. When you do, you'll see yourself healed and with all of your needs met.

As a 17-year-old on the bed of sickness, Kenneth E. Hagin didn't have anyone to encourage him in his faith. In fact, the only pastor who came to visit him said, "Be patient, my boy. In a few days it'll all be over."

Brother Hagin's only encouragement was the Word of God. After seeing in Mark 11:24 that he could have the things he desired, he said to himself, "I desire a well body more than anything else."

So Brother Hagin threw his legs over the side of the bed, grabbed hold of the bedpost, and pulled himself up. That's when God's healing power flowed through his body.

His healing didn't manifest in bed. It manifested when he acted on God's Word.