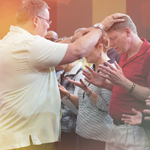 When Tony and Jeannette Finley moved to Omaha, Nebraska, in 2003, Tony, a 1994 Rhema Bible Training College graduate, knew in his heart that he and Jeannette were supposed to pioneer a church there.

Omaha is Nebraska's largest city, and most churchgoers attend mainline denominational churches. Although many of those churches were opposed to the word of faith message, the Finleys believed that the Lord would open a door for that message to spread in this vibrant city.

"We loved the people," says Tony. "We didn't jam anything down their throats. If somebody said, 'I believe this,' or 'theologian so-and-so says this,' we'd say, 'That's great, but where is that in the Bible?'

When Faith Family Church began on January 7, 2007, Tony preached the Word in an environment of love. As the people continued hearing the Word, their lives began to change. And they started bringing their friends to church.

"Yes, we're in an environment where you would say you're going to have a very hard time building an independent, Full Gospel, word of faith church," Tony says, "but we have fruit. God placed us [in Omaha], and He's bringing the increase."

God Is Good . . . All the Time!
That fruit is seen in the lives of Faith Family Church's people. As they sit under the Word and put into practice the truths they've learned, they are clearly flourishing. People are experiencing true victory, not just victory in theory. Dave and Mary are one example. When they began attending

Faith Family Church, Mary didn't like hearing Tony say, "God is good all the time." When she was younger, one of her children, an infant daughter, died, and she believed that God "took" her. Although Tony's talk about God's goodness irritated Mary, she didn't want to leave the church. Her husband was growing in the Lord, and she liked that.

After Mary had attended Faith Family Church for three years, her daughter Nicole became pregnant. The pregnancy was filled with problems. But Mary had grown in the Lord, and she began standing in faith for her grandchild's safe delivery.

When Mary's granddaughter was born, the doctor discovered that the umbilical cord was shredded. No one could understand how the baby received any nutrition during the pregnancy. But the little girl was born without complications, and today Hallie is a very active and healthy 2-year-old. Mary now says, "One thing I know—God is good all the time!"

Making God Irresistible
The night before the Finleys' first church service, the Lord said to Tony, "I am irresistible. If you'll allow My Spirit to create an environment of My presence and you'll allow Me to move and flow with Me, I'll draw people to Me."

From the beginning, Tony and Jeannette and their leadership team have done just that. "We put the Word of God above everything, but in an atmosphere that is saturated with the love of God," says Tony.

When Faith Family Church started, hardly anybody brought a Bible to the services. Today, from the youngest to the oldest, the congregation has a passion for the Word.

The college and career group is on fire for the Lord. They constantly share the Word with each other, texting scriptures back and forth through a popular cellphone app. The fruit is seen in many new people getting saved and filled with the Holy Spirit.

Tony and Jeannette teach their church family that life and ministry flow out of the overflow of their personal walk with the Lord. They encourage them to come to Faith Family Church full and be led by the Spirit on ways to minister to each other. This has created a wonderful dynamic among members. Both young and old freely speak encouraging words to one another.

Living to Give
Tony and Jeannette want the church members to minister beyond the four walls of their building. They promote a lifestyle of outreach—urging the congregation to minister to others in their daily lives. As a result, unsaved and unchurched people in the community have been touched by God's love. For example, on more than one occasion, as they are led, church members have paid for people's groceries, meals, gas, and so forth.

One time the college and career group found out that a waiter didn't get tipped at a Christian event. So they collected $300 among themselves and gave it to him. They said, "Listen, nobody's perfect. We want to bless you, because we want to make sure you know the Lord isn't that way."

Members of the men's Bible study have taken it upon themselves to be a blessing to those in need. They've painted houses,installed windows, helped people move, and given food and other assistance on a regular basis.

Faith in Action
When Faith Family Church held its first women's conference, Breanna, a member of the college and career group, planned on going. She also felt led to pay for three of her friends to go. A recent high school graduate, she didn't have much money. Besides, she was saving for college and to buy a car. She dipped into her savings to pay the $180 in registration fees. For her, this was a huge amount of money. But not long afterward, her aunt in California bought a new car and wanted to give Breanna her old car. Then, in one week, people randomly gave her $1,500! Without a doubt, this 18-year-old knows that when you follow God's leading to bless others, He will make sure your needs are abundantly met!

A Miracle Testimony
Kenneth and Lynette Hagin held a Living Faith Crusade at the Finleys' church in April. After Lynette ministered the morning of the last day, Tony came to the platform with a church member's prayer request. The woman's 14-month-old great nephew, Jackson, had recently undergone surgery. While operating, the doctor accidentally cut off his epiglottis, which keeps food and liquids out of the windpipe, and the top part of his esophagus.

A team of surgeons was called in to fix the damage. But after the second surgery, the prognosis was that Jackson probably wouldn't be able to swallow, eat, or drink for the rest of his life. Tony led the congregation in prayer for Jackson's total healing and complete restoration. Before the service that evening, Tony and Jeannette received word that the toddler was standing up in his crib talking! At first, he continued to be fed through a tube. But by June 1, a little less than two months later, he was eating whole food. His vocal chords were miraculously doing the work of the epiglottis! The doctors had never seen this and wanted to publish this miracle in a medical periodical.

God is moving mightily in Omaha. These are only a few of the many good things He is doing in and through Faith Family Church. There is still much work to do. But as the Lord grows and develops His congregation, church members are transforming their community for His glory.

Tony, Jeannette, and their leadership team are committed to growing the church to 600 members. And with the forward momentum already evident, it won't be long before Faith Family Church reaches that point and has a greater impact on Omaha for the Lord.