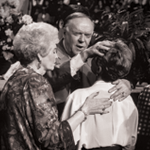 Laying on of hands is one of the six fundamental principles of the doctrine of the Lord Jesus Christ listed in
Hebrews 6:1–2. Jesus Himself freely employed laying on of hands to heal people. In Mark chapter 6, we see Jesus in His hometown of Nazareth:

MARK 6:5 (NKJV)
5 Now He could do no mighty work there, except that He laid His hands on a few sick people and healed them.

Notice this text is speaking of Jesus. It doesn't say He wouldn't do mighty works in Nazareth. It says He couldn't. It seems, therefore, that the laying on of hands will work when nothing else will! The few who were healed that day were healed by the laying on of Jesus' hands.

Another example of Jesus' laying hands on someone is found in Matthew 8:15. The Bible says when Jesus entered Peter's house, He found Peter's mother-in-law sick with a fever. "So He touched her hand, and the fever left her. And she arose and served them" (NKJV).

MARK 8:22–25 (NKJV)
22 Then He came to Bethsaida; and they brought a blind man to Him, and begged Him to touch him.
23 So He took the blind man by the hand and led him out of the town. And when He had spit on his eyes and put His hands on him, He asked him if he saw anything.
24 And he looked up and said, "I see men like trees, walking."
25 Then He put His hands on his eyes again and made him look up. And he was restored and saw everyone clearly.

This blind man was healed by the laying on of Jesus' hands. Some may say, "Jesus prayed for that blind man twice." I do not know that He prayed for him at all. The Bible does not say that He prayed. The Bible says He laid hands on him twice! It is scripturally correct to lay your hands, a second time, on a sick person, if necessary. It's good to know what Jesus did in certain circumstances. Then we will know what to do.

MARK 7:32–33, 35 (NKJV)
32 Then they brought to Him one who was deaf and had an impediment in his speech, and they begged Him to put His hand on him.
33 And He took him aside from the multitude, and put His fingers in his ears, and He spat and touched his tongue. . . .
35 Immediately his ears were opened, and the impediment of his tongue was loosed, and he spoke plainly.

In the above two cases, notice that groups of people brought the blind man and the deaf man to Jesus. These people, as well as the sick themselves, believed in the laying on of hands and got results.

In the case of the deaf man, Scripture does not say that the people asked Jesus to heal the man, although that is inferred. It says they asked Him to put His hands on him.

MARK 5:22–23 (NKJV)
22 And behold, one of the rulers of the synagogue came, Jairus by name. And when he saw Him, he fell at His feet
23 and begged Him earnestly, saying, "My little daughter lies at the point of death. Come and lay Your hands on her, that she may be healed, and she will live."

We know from Scripture that the child died before Jesus reached Jairus' house. But Mark 5:41 (NKJV) says, "Then He took the child by the hand." In other words, Jesus touched her. He took her by the hand. She was raised from the dead and was healed.

People still preach repentance and water baptism. Nobody objects to that. Why not, then, preach all of the Great Commission?
The disciples took Jesus seriously. Acts 5:12 (NKJV) says, "And through the hands of the apostles many signs and wonders were done among the people."

Scripture goes on to say that the islanders brought their sick to Paul and he ministered to them. Obviously Paul ministered by the laying on of hands.

ACTS 19:11–12 (NKJV)
11 Now God worked unusual miracles by the hands of Paul,
12 so that even handkerchiefs or aprons were brought from his body to the sick, and the diseases left them and the evil spirits went out of them.

Here, not only were the sick healed, but the demonized were delivered as cloths Paul had laid his hands on were laid upon their bodies.

Some will say, "The apostles could do that, but it's not for us today." This is a worn-out lie that no one should be listening to! Jesus didn't say these signs would follow just the apostles. To say that we cannot lay hands on the sick today is to say that one of the fundamental principles of the doctrine of Christ has been done away with.

If laying on of hands for healing has been done away with, no one would have a right to believe in the doctrine of repentance.

(Editor's Note: This article has been adapted from Kenneth E. Hagin's minibook Laying On of Hands.)