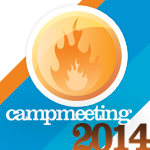 Before Campmeeting 2014
kicked off, Kenneth and Lynette
Hagin heard the same word from the Lord—"New beginnings,
new season." And that's exactly what people experienced throughout the week. As they received revelation from the Word and were refreshed in the Holy Spirit, attendees stepped up higher with God. The result? Turnaround in their lives like they'd never seen before! Here's a taste of what this year's Campmeeting attendees heard:

//KENNETH W. HAGIN
Many people confess the Word over situations in their lives. But when they don't see immediate results, they get in fear and doubt—and lose everything they have.

Mark 11:23 says, "whoever says to this mountain, 'Be removed and be cast into the sea,' and DOES NOT DOUBT in his heart, but believes that those things he says will be done, he will have whatever he says" (NKJV). It's your continued confessing of the Word of God that will get the answer through to you. You can't speak according to how you feel or according to the circumstances. But if you'll learn to walk in faith—if you'll stand your ground when it doesn't look like anything is changing—there will be no such thing as an impossibility in your life!

//CRAIG W. HAGIN
"So what if you've failed. It's not about whether you've failed or not. It's about what you do after you fail. Get back on your feet, arise, and move into what God has for you."

//CHARLES COWEN
"We have a right to believe God for everything He promised us in the redemptive work. Nothing is to be excluded. Nothing is so far-fetched that we cannot have it. All of it is available to every believer."

//MARK HAKINS
"Before you ever had a problem, Jesus made provision for you! So shake off the dust of the past. Arise and shine. You ain't seen nothin' yet! This is your hour. Your best days are right ahead of you."

//STEVE HOUPE
"Don't let the devil fool you. Don't let circumstances and situations deceive you. If you have Jesus, you have
everything you need to overcome the things in this life that will oppose you."

//JOEL SIMS
"We pay so much attention to our outward appearance. But before God promotes us, He's going to check our heart. We must lay down unforgiveness and pride in order to run the race He has set before us."

//SCOTT WEBB
"It matters to God how you live. It matters what condition your life is in. You're a reflection of Him, and He wants to use you as a sign that displays His grace and goodness to the world." 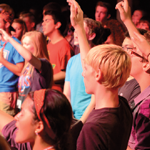 "You are champions in Christ Jesus!" These were the words that hundreds of 6th through 12th graders heard again and again throughout the week at Summer Blitz 2014. In a world filled with fear and confusion, speakers encouraged these radical young people to show forth God's light and be the courageous champions He created them to be.
The week was packed with high energy music, anointed services, impacting small groups, and intimate times of worship. Many youth were born again, filled with the Spirit and healed. As God's Presence flooded the services, many of them committed to let go of fear, follow the Lord's plan for their life, walk in love, and boldly share the Gospel with those around them. They determined to grab hold of the "overwhelming victory" Christ provided (Rom. 8:37 NLT) and move forward boldly—as champions for Him.

//ROB POST
"Gideon went to battle with 300 men and fought against 135,000. He won because God was with him. God is on your side too. He didn't call you to fail. He's given you a gift and purpose so you can win in life."

//WILL POST
"In order to be a great influence, we need to change our attitude—our behavior. That will ultimately change our circumstances and we'll move from being a victim to a victor."

//TY WARD
"I looked up the word 'champion' in the Urban Dictionary. It says, 'someone who commits an act of the following: extreme courage, extreme awesomeness' and 'one who is worthy of positive recognition for such an act.' That's y'all!"

//JULIA POST
"Don't get caught up in the things of this world—things that keep you where you are instead of moving you forward. If you want to be a champion, you have to be willing to sacrifice. Then you'll be a vessel Christ can use."

//CHRISTIE GRAHMAM
"You are smart, strong, brave, and bold. And you are free in Jesus' Name! Free to do the will of God. Free to fulfill your call. Free to dream again. You are free to be the superhero the world is looking for."

//CLIFF GRAHMAN
"God gave Samson strength beyond himself for what He had set him apart to do. You are a Samson generation. You are champions. You are rescuers. You are called to go back to your school and show forth God's light."

//MYNISTA
God is looking for a radical generation of Christians who are loaded with the dynamite of the Holy Ghost. We obey on command, walk in love, and preach the Gospel. We're led by the Holy Spirit. We are champions—warriors—in partnership with God."

"We see from Romans 8:37 (NLT) that we have 'overwhelming victory' in every area of our lives. We can maintain a daily walk of victory because Jesus lives in us. We are always champions no matter the circumstances. Bottom line . . . we win!"
//Denise Burns,
Rhema Bible Church Student Ministries Pastor
& Summer Blitz Host