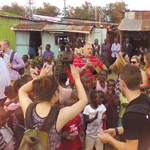 "This gospel of the kingdom shall be preached in all the world for a witness unto all nations; and then shall the end come."
—Matthew 24:14

Tad Gregurich is no stranger to Kenya. Since 1996 he's made around 20 trips to this African nation. His goal has been to "train Kenyans to reach Kenyans." And he is seeing remarkable fruit from his efforts.

On his most recent trip, at the end of May, Tad took a team of 17 Rhema Bible Training College students and graduates and Rhema Bible Church members with him. As the current dean of RBTC USA, he believes these short-term missions trips are vitally important. It's an opportunity to take training out of the classroom and into the real world.

Together, Tad and the team traveled to the towns of Muhoroni, Kakamega, Siaya, and Boro. They visited orphaned children, ministered in hospitals, held two street crusades, and did street evangelism. "This was one of the youngest and loudest groups I've ever taken," Tad noted. "But this generation of Rhema students is bold and not afraid to love people. It inspires me (having graduated from RBTC 30 years ago) to take the love of God and the message of faith to a lost and dying world. It inspires me to expect Bible results like never before!

//Anthony Washington
(2014 Graduate)
"My life was changed by being in Africa. The anointing of God showed up in buildings that were just concrete and dirt. And I realized that preaching is something I want to do. Singing is my comfort. Preaching . . . that's another ballgame! But when Dean Tad called on me to preach, I just went for it—and enjoyed it! For the first time, I could see myself ministering in the uttermost parts of the world. This trip opened up a new appetite in me. Thank God for Rhema and Dean Tad's leadership on this trip. He trusted us to get up there and get the job done. And that was empowering! I'm taking the limits off God from now on."

//Amber Warner
(2014 Graduate)
When suddenly called upon to preach in the small town of Siaya, Amber Warner remembered how it felt. "I expected to be super nervous," she laughed. "I'm the type of person who always thinks I could be more prepared. But it's amazing to me how the Holy Ghost just fills your mouth. It just felt really natural to get up there and minister. And that kind of situation would normally unnerve me. But I could see that the people just really needed to be helped. One gentleman said to me afterward, 'Thank you for preaching what you did. Our people need that.' "I needed that 'baptism by fire' moment," she continued. "It was the first step of putting into practice what I learned in the classroom at Rhema. And it gave me a confidence. I see that as long as you are willing and make yourself available, the Holy Ghost will fill your mouth."

//Jacob Roach
(2014 Graduate)
While in Kenya, Jacob Roach found himself in a mud hut, surrounded by six or seven Muslim men. He felt a boldness rise up on the inside and told them, "I'm going to pray in Jesus' Name and we're going to have some things happen here. And I want to see you at the crusade tonight." That night, three of those men received Jesus as Savior. "There is no religious boundary—no border—that can keep the Gospel away," Jacob exclaimed.

//Ronnie Elliott
(2014 Graduate)
"In the town of Muhoroni, we were praying for people in the hospital. I was really glad to be able to rely on my Rhema training. We came into this big room and saw a man in one of the beds. You could see his frail body through the thin blanket. He was wasting away. We told him that Jesus loved him and wanted to heal his body. Barely able to get the words out, he said he hadn't eaten and was extremely weak. We laid hands on him in the Name of Jesus and he began to stir. A light came over his face and he smiled. We could see an instant change. After that, we ministered the Gospel to him and he was born again. "Two days later we got a call from the pastor in that area. This man had been discharged from the hospital the next day. He'd been dying of AIDS, but Jesus healed him that day! It's such a wonderful thing to know it's not about you. You just have to be obedient to go and speak the Name!"

//Peggy Elliott
(2014 Graduate)
“My highlight was going to the labor and delivery ward at the hospital in Muhoroni. We got to go in and pray for all the newborn babies. I was scared of missions before coming to Rhema. But I’m not scared anymore. I know it’s doable.”

Meghann Housley
(2nd-Year Student)
"The highlight of my trip was going and doing the street evangelism. We stepped into one home and found a young girl with a large tumor on her face. We laid hands on her and prayed that it would be removed. Then we encouraged her to thank God that it was gone, even though she could still see it. Later, I received a message from our interpreter. When he'd gone to check on the girl, a neighbor told him it was drying up. Praise the Lord!"

//Joshua Egts
(2014 Third-Year Graduate)
Joshua Egts didn't want to come to RBTC because he was certain he'd end up in Africa or somewhere like it. How right he was! What he didn't know was how much he would come to love missions. "I wouldn't call my Rhema experience complete without these missions trips," he said. "They really show you that you're needed, and that your life is significant. Even after completing first year, you have so much to give to people. They're in desperate need of what you have. "Before coming to Rhema, I didn't even know this whole other world of people and culture really existed. I was in a bubble. But these trips bring out desires you don't even know are in you. For me, going to Kenya just helped solidify my calling. I loved doing the crusades, street evangelism, and singing. I can really see myself traveling all around the world doing this."

//Mike Riddle
(2nd-Year Student)
Mike prayed for a man with a locked elbow joint. As he prayed, he took hold of the man's arm and began to pull it down. It popped so loudly that people nearby turned to see what the sound was. The man began to move his arm and elbow freely. He testified to those around him that Jesus had healed him.