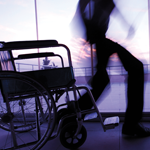 If you are a believer, your spirit was made a new creation supernaturally in the new birth. If you are Spirit-filled, you were supernaturally filled with the Holy Spirit and were given supernatural utterance in other tongues by that same Holy Ghost.

You can live a supernatural life in Christ by maintaining a supernatural prayer life. One way to develop your spirit is by praying much in other tongues.

Not only will praying in tongues develop your spirit, it will also help bring the supernatural power of God into manifestation.

Yearning for the Miraculous
People have a deep-seated desire for the miraculous demonstration of God's power and glory. That's because mankind was created in the image of a supernatural, miracle-working God. And God has provided an entrance into the supernatural through the baptism in the Holy Spirit and by His Word.

Mankind yearns to see the miracle-working power of God in demonstration. But sin has blinded many and has kept them imprisoned in the natural realm. Thank God, though, that the hunger for the supernatural is within our hearts. If we seek after God, we can learn to live in the supernatural realm by the power of the Holy Spirit and the Word of God.

When churches keep the Holy Spirit from having His way in their services, they eventually become cold and dead spiritually. When any body of believers denies the supernatural, they begin following a dead religion of ethics instead of experiencing a supernatural relationship with a miracle-working God.

In Jesus' day people were drawn to Him because He was a miracle worker. If ministers today would preach the anointed Word and allow Jesus to work miracles in their midst, people would be drawn to come and witness the supernatural power of God!

Ring the Dinner Bell
As a young preacher, I heard Raymond T. Richey preach at the Texas District Council meetings of the Assemblies of God. He often said, "Divine healing is the dinner bell. Keep ringing that bell and people will come."

I went back to my church, which had a congregation of less than 100, and began ringing the dinner bell every Saturday night. I preached what the Word of God said about the power of the Gospel to save, deliver, and heal.

For six months nothing happened. But then we hit a gusher! The insane were delivered! The paralyzed were healed! People were raised up from deathbeds! And people from several neighboring counties came and filled the building every Saturday night.

I kept ringing the dinner bell, and God was faithful to manifest His supernatural delivering power.

Miracles Are for Today
Jesus is as much a miracle worker today as He ever was. He has not changed. And man needs the miraculous power of God today just as much as he ever did.

Some people say, "We don't need miracles anymore." But we do! Thank God we can act upon God's Word, and God's power will manifest just as it did in the days when Jesus walked the earth.

Jesus Christ is the same yesterday, today, and forever
(Heb. 13:8). He has not changed. If He healed people when He walked upon this earth, He heals today. If He worked miracles then, He works miracles today.

We need to find out how to scripturally put a demand on
Jesus' miracle-working power. Then we can work with Him and see His miraculous power manifested in our lives.

Jesus works with us today just as He worked with the Early Church. If we want to increase the manifestation of God's miraculous power in our midst, we must do what those in the Early Church did—preach the Word!

I was reading this passage in Mark chapter 16 one day when I was pastoring my last church, and I got stirred up about it. I began to fast and pray and wait on God.

"Lord," I said, "things are comfortable in our church. The church is growing. It's financially sound. A few people are getting saved and baptized in the Holy Ghost, and a few are being healed. But as I read Mark chapter 16, it seems to me that we ought to be experiencing more supernatural signs and demonstrations of Your power than we are."

On the third day of my fast, the Lord spoke to my spirit, "I said I would confirm My Word with signs following."

"You don't have to pray that I will do it," He said. "You don't even have to fast to get Me to do it. If you will put the Word out, I will confirm My Word."

I checked up on what I was preaching and I found out that 60 percent was Word, 35 percent was unbelief, and 5 percent was tradition! When I stopped preaching unbelief and religious tradition, we immediately began to see results. Signs followed the Word and the miraculous power of God began manifesting in our church.

The early Christians didn't heal the sick and cast out devils without putting out any Word. First they preached the Word. Then the Lord confirmed the Word they preached with signs following.

The supernatural is man's realm. It's up to us whether we live our lives supernaturally in the power of the Holy Spirit. If we will educate our spirits by diligently studying the Word of God and praying in the Holy Ghost, the supernatural realm of God will become as natural to us as water is to fish.
_____________
[Editor's Note: This article was adapted from Kenneth E. Hagin's book Classic Sermons.]