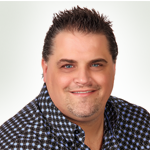 FAITH IS SIMPLE. SOME PEOPLE MAKE IT HARDER THAN IT REALLY IS. BUT WALKING AND LIVING BY FAITH IS NOT HARD.

Often when I minister on faith, I use scriptures that most of the congregation can already easily quote. I once asked the Lord to give me a fancy scripture—one that people would hear and say, "I didn't know that was in the Bible!"

The Lord never gave me any new verses, though. He just said, "Once people actually understand what they know, then we can move further. But until then, we can't go any further."

I've discovered that many Christians can quote a lot of scriptures on faith, but they don't know how to use their faith. They start out in faith, but something happens along the way and they step out of faith.

The Story of the Fig Tree
Let's look at how faith works. In Mark chapter 11 Jesus was on His way to Jerusalem when He saw a fig tree with leaves on it. I'm not a "figologist," but according to what people say, if a fig tree has leaves, it should also have fruit.

Jesus was hungry, and thinking He could get something to eat, He and His disciples headed over to the tree. But it didn't have any figs on it because, as scripture says, it wasn't the season for figs (Mark 11:13). Jesus then said, "No man eat fruit of thee hereafter for ever" (v. 14).

The next morning when Jesus and His disciples again passed by the fig tree, the disciples pointed out that it had dried up from the roots (vv. 20–21).

From the Inside Out
I want you to notice that when Jesus cursed the fig tree, as far as the disciples could tell, nothing happened. If they had seen the tree wither immediately, it wouldn't have been a big deal the next day when they saw it. They would have already known it was dead and said, "There's the tree that Jesus cursed."

Contrary to what it initially looked like, something was happening. It's just that no one could see what was going on inside the tree. The roots began to dry up immediately. It took time for

Contrary to what it initially looked like, something was happening. It's just that no one could see what was going on inside the tree. The roots began to dry up immediately. It took time for it to become evident on the outside. By the next morning, the fig tree was completely withered—both inside and out.

I'm mentioning this because people often get discouraged when they're believing for something and don't get immediate results. I blame this on our microwave society. People today want instant gratification. If they don't see something happen right away, they don't think their faith is working.

When people get in healing lines and hands are laid on them, the healing power of God goes into them. If they don't see any changes right away, they shouldn't get discouraged. Something is happening. God's healing power was imparted into their bodies, and it's working in them even if they don't see or feel anything.

Have Faith in God
When the disciples mentioned to Jesus that the fig tree had dried up, His first words were, "Have faith in God" (Mark 11:22). Sometimes this verse is translated, "Have the God-kind of faith." That sounds good, but what exactly is the God-kind of faith? The Bible is filled with stories of people who have had faith in God, and as a result they've had their needs met. But we can also look in the Bible and see God's faith working.

In Genesis 1:3 God said, "Let there be light." Notice that He didn't fast and pray for 40 days and nights before light appeared. It immediately came into being.

Most of us have heard that verse so often, we don't stop and consider what happened when God spoke. Let's break it down.

If you look closely at these three points, you'll see they are exactly what Jesus said in Mark 11:23–24. Right after Jesus told His disciples in verse 22 to have the God-kind of faith, He showed them how to do that.

MARK 11:23–24
23 Verily I say unto you, That whosever shall say unto this mountain, Be thou removed, and be thou cast into the sea; and shall not doubt in his heart, but shall believe that those things which he saith shall come to pass; he shall have whatsoever he saith.
24 Therefore I say unto you, What things soever ye desire, when ye pray, believe that ye receive them, and ye shall have them.

Whosoever Means You!
Notice in verse 23 that Jesus used the word whosoever. That tells us that Jesus' instructions weren't for the disciples alone. Anybody can do this!

This is what God wants us to do. Many Christians want their pastor to speak to their mountains for them. But it's up to each one of us to speak to the mountains in our lives. Sooner or later we all have to grow up and take responsibility for ourselves.

Parents gladly feed their infants. As the babies grow and develop, they're taught how to use forks and spoons. A time comes, however, when parents stop spoon-feeding their kids. They expect them to feed themselves.

Unfortunately, a good number of Christians don't want to grow up. They say that faith is hard, and they want their pastor to keep spoon-feeding them. Instead of having faith in God, they place their faith in their pastor or someone else.

You Have What You Say
Jesus told us we could speak to our mountains. Are you doing that? If you're not saying anything, you won't receive anything. Or maybe you are saying things you really don't want—things like "I'm always sick" or "I never have enough money."

Start saying the things you desire. And remember, if you don't see anything at first, know that your words have already started to change the situation. Be patient, and you will see it come to pass.

The Love of God

It can be hard to have faith in God if you've never had a relationship with your earthly dad. Some dads abuse their kids. And some kids don't know who their dad is. Because of these things, it can be hard to believe that your Heavenly Father loves you.

Some fathers are never around; but God always is. He promises never to leave you nor forsake you. Although some fathers lie, God never does. You can count on whatever He said in the Bible. In spite of what your dad was like, never doubt God's love for you. He really loves you!