When God told the Israelites to go in and possess the Promised Land, it appeared as though the Jordan River was an impenetrable barrier between them and the land of promise. You see, the river was at flood stage, and there was no way to cross it!

God knew the Jordan River was there when He told the Israelites to cross over to their Promised Land. But still He gave the command to Joshua: “. . . Arise, GO OVER THIS JORDAN, thou, and all this people, unto the land which I do give them. . .” (Joshua 1:2). 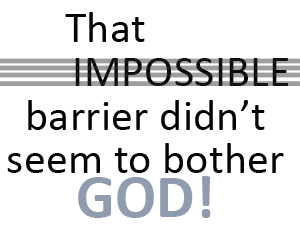 How did God expect the Israelites to get across that river? Isn’t it interesting that just because they ran into an impossibility, God didn’t tell them they could quit. That impossible barrier didn’t seem to bother God!

It didn’t make any difference to God that the Jordan River blocked the Israelites’ passage into the Promised Land. Why? Because impossible barriers are nothing to God! Once again, God gave His people a plan so that by His strength and wisdom, they could accomplish the impossible.

The Lord told Joshua to instruct the priests who were carrying the Ark of the Covenant to cross over the Jordan River first. The Lord said that as soon as the soles of their feet touched the water the Jordan River would stand up in a heap so all the people could pass over on dry ground (Joshua 3:13).

In the natural, it sure didn’t make any sense to send the priests into a river at flood stage. Flood-stage water is always swift water. That’s why the news media today announces when there are flash-flood warnings. You’re never supposed to get into fast-moving flood water because it will pull you under!

Do you ever feel overwhelmed by the circumstances of life? Sometimes it seems as though adversity comes in like a flood and tries to sweep everything around you into its current—including you! And maybe sometimes you feel like you’re hanging on for dear life.

When Joshua gave that command, you can understand why the priests might have thought, Joshua, the river is swift. We’ll be swept away and drowned.

But Joshua had heard from the Lord, and he’d seen the Lord’s great faithfulness in all the miracles He had previously performed for the Israelites. Joshua was ready to obey God.

If the people had just stood there without taking a step of faith, nothing would have happened. They had to be obedient to God’s command and take that step of faith and get into the water! Faith takes action!

Has a river at flood stage come into your life, causing you a lot of problems? Instead of taking a step of faith, are you standing at the bank crying, “Lord, will You do something about the river”? 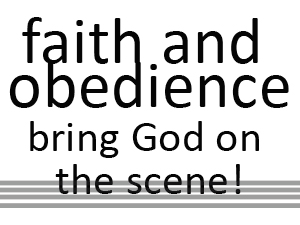 If you’ll just get up and take that first step of obedience, the Word dwelling in you will be a light to your feet, showing you exactly where to take the next step.

And the Holy Spirit inside you will show you how to get across any river at flood stage in your life. But the Ark of God’s Presence won’t do you any good until you step out in faith and step into the water.

Faith and obedience bring God on the scene! God came through for those priests as soon as they stepped into the water. The Jordan parted so the rest of the Israelites could cross over on dry ground.

You just need to take hold of God’s Word and get in the water! Then you’re going to see something happen in your life. You can stand on the sidelines all you want, waiting for God to do something, but the Lord is waiting for your obedience.

The Lord promised that He would deliver you out your problems, circumstances, and troubles, no matter what they may be. Whether your problems are spiritual, physical, financial, or something else, it makes no difference to the Lord! No matter how big the problem or flood seems to be, God will deliver you!

Just standing on the edge of obedience with hope and wishful thinking won’t get you across your river and into your promised land. It’s time that you, as a believer, begin to speak the Word with authority over your situation. Then obediently move out in the power of the Holy Spirit to receive what belongs to you. Today is your day to begin possessing the promise! 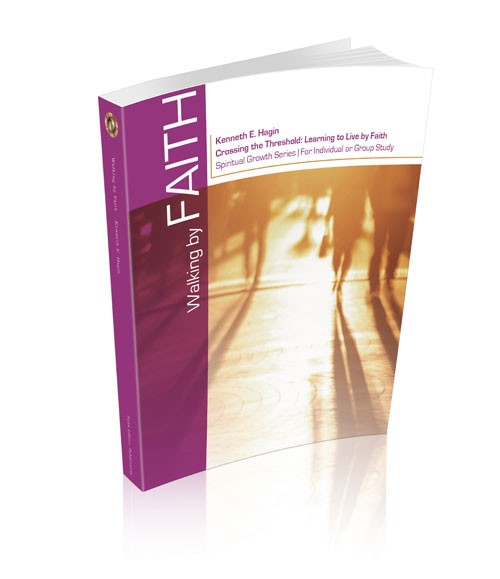 Each lesson in this comprehensive study guide will help the believer achieve a workable operation of faith in his life—a faith that works.