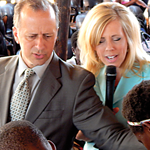 As he traveled through the ruggedly beautiful countryside of Botswana on his way from Johannesburg to Zimbabwe, Matthew Buckley sensed the Lord telling him that one day he would return to this African nation. A year after Matthew's 1987 graduation from Rhema Bible Training College USA, the Lord had led him to go to Africa for five months to hold crusades and do other missions work.

Back at home in the United States, Kristin, Matthew's fiancée, was finishing up her last year at RBTC. While Matthew was in Africa, the Lord began dealing with Kristin

to be willing to leave everything and go anywhere to share the message of faith.

When Matthew returned to the U.S., he knew that he was called to reach the lost in Africa. But he hadn't yet shared that with Kristin, and he was nervous about telling her. He loved her, but he wasn't sure she was ready to follow him halfway around the world.

Finally the day came for them to talk about their future. Testing the waters, Matthew began, "Well . . . I really liked Africa a lot."
"Yeah?" Kristin asked curiously.
"Maybe we'll go back there," he continued. "Maybe for more than five months."

He examined her face to gauge her reaction. Kristin seemed good with that, so he got to the point: "Like, maybe, to live there?"
"I would love to go to Africa," she responded.

Matthew and Kristin married in November of 1988. Before the year was out, they sold all their belongings and placed their wedding gifts in storage. Then, with suitcases packed and not much money, they boarded a plane for Botswana to proclaim the message of faith.

God Is Faithful!
Every Sunday morning about 200 members fill the seats at Light of the World Church to hear God's Word. The Buckleys are committed to giving their congregation balanced teaching so they can live victoriously. They are imparting faith, righteousness, and the knowledge of who they are in Christ. And the Word of God has changed many lives.

During a church prayer meeting, the Buckleys shared how God had turned a situation around for them after they decided to stop complaining about it. They had ordered a much-needed car. It was supposed to come in six weeks, but after a year they still had no car. Then they remembered one of their RBTC USA instructors saying, "If you're complaining, you're not reigning." So they stopped complaining, and in two weeks they had the car keys in hand.

After hearing that testimony, a married couple in the church stopped complaining about a business partner who had caused them financial difficulties. Instead, they began praying for favor and blessings for that person. And God was faithful! On her job, the wife received a promotion, a new contract, and a bonus so large that it paid off everything they owed from the bad business deal!

"To see people walk through adversity and apply their faith—there is nothing more rewarding," says Kristin. "You can get blessings yourself. But to teach others and then watch them experience it—there is nothing like that."

Reaching the Kids
The children in their church are experiencing God's goodness too. During one children's church service, 47 kids received the baptism in the Holy Spirit. They didn't laugh or giggle at the mysterious sounds they were uttering. Kristin walked down each row where the kids were seated and listened to their voices. She could hear them all quietly praying to their Heavenly Father and was moved by their heartfelt worship. "It was beautiful," she says.

Answering a Nation's Cry
The Buckleys' church motto is "Reaching Upward—Reaching Outward." As their congregation experiences God's goodness, faithfulness, and presence, they are able to go out and be a great light in their nation. One way they are doing that is by bringing God's life and light to people affected by HIV.

Botswana has one of the highest HIV rates in the world. In 2013 an estimated 310,000 people aged 15 and up—more than 21 percent of that age group—were living with the virus. For the past two years, Light of the World has been working to change that statistic through God's Word and teaching on natural topics such as dating, sexual behavior, and how the virus is transmitted.

Kristin has a deep passion for arming the young people of Botswana with the truth of God's Word. "We are raising up a generation that will not be touched by the virus," she says. "We are raising them up to know Who their God is and where their dignity comes from. We are teaching them that they have been set apart for God's purpose."

During the first year of the outreach, Matthew and Kristin had the HIV test themselves to help their congregation feel more at ease about the experience. The Buckleys each had their fingers pricked to draw blood and answered a series of questions. In Botswana, marriages are few and promiscuity is common. The man administering the test was so touched by the Buckleys' high standard of marriage and loyalty to each other that he came to church the next day and gave his life to the Lord.

In September the church held their second HIV test day. The ministry presented morning and afternoon workshops and a Christian agency administered the tests. Many came to the event and were blessed by the church members' compassion.

The Vision Grows
The Buckleys' vision continues to expand. The government gave them 11 acres, and they are using it to build larger facilities for the church, academy, and training center. They currently are in the first phase of a building project.

Matthew and Kristin are looking forward to reaching more people with God's love and compassion. For them, it is a privilege to serve the Lord in Botswana.
"I love what we do," says Matthew. "I wouldn't trade it for anything."