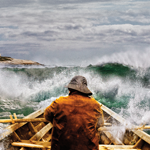 "Life is a journey, so enjoy the ride." Have you ever heard that saying before? I think it holds a lot of truth. God has a journey that He wants each of us to go on. He has a plan and a purpose that He expects us to fulfill. He didn't put us on this earth just to sit around, eat Cheerios, and do nothing. But the deal is, we've got to stop worrying about the storms that arise on our journey and start enjoying the ride. We should not make the storms our storms

Remember what Jesus' disciples did in Acts chapter 4? They became fearful when a storm arose while they were out on the water.

Mark 4:35–41 (NKJV)
35 On the same day, when evening had come, He said to them, "Let us cross over to the other side."
36 Now when they had left the multitude, they took Him along in the boat as He was. And other little boats were also with Him.
37 And a great windstorm arose, and the waves beat into the boat, so that it was already filling.
38 But He was in the stern, asleep on a pillow. And they awoke Him and said to Him, "Teacher, do You not care that we are perishing?"
39 Then He arose and rebuked the wind, and said to the sea, "Peace, be still!" And the wind ceased and there was a great calm.
40 But He said to them, "Why are you so fearful? How is it that you have no faith?"
41 And they feared exceedingly, and said to one another, "Who can this be, that even the wind and the sea obey Him!"

When Jesus spoke the words, "Let us cross over to the other side," I believe that both He and His disciples expected to go to the other side. Jesus went to the back of the boat and fell asleep. He wasn't worried, because He knew what He had spoken. Even when water began filling the boat, Jesus didn't wake up. He knew they were going to the other side, no matter what.

Unfortunately, I think the disciples expected to go to the other side without any opposition. So when the storm arose, they became fearful.

A lot of Christians are the same way. When something unexpected comes up, they begin to worry about the situation more than they think about Jesus.

We can't focus on Jesus when we're thinking about the waves and the storms around us. And that's what the devil wants. Jesus told us in John 10:10 that the thief—the storm maker—is here to form storms in our lives every day. He's here to steal from us, kill us, and destroy us.

Certainly, Jesus was upset with His disciples in Mark chapter 4. He couldn't figure out why they didn't have enough faith to either get rid of the storm or not worry about it. But He didn't cast them out. And He won't cast us out either. He's with us—even when we feel like we're going under and there's no way we can make it.

Let Go and Let God
A great example in the New Testament of someone who faced a lot of storms is the Apostle Paul. He was put in jail, stoned and left for dead, and even shipwrecked, but Jesus never left him. And nothing fazed Paul either. Why? He knew who he was in Christ Jesus. That's why he was able to finish his course with joy
(Acts 20:24). He wasn't looking at the storm; he was looking to what God had for him to do in the future.

We should have the same focus. You see, God didn't bring us this far to let us down. He didn't bring us to this point just to drop us off and forget about us. Our storm can only affect our future if we let it mess up our present.

You may say, "But things didn't happen the way I thought they were going to." So what! It's not about your circumstance. Let go and let God. As long as you're trying to figure out how you are going to solve your problem, you're not letting Him take care of it.

Whatever kind of storm you're facing, Jesus is still in your boat. All you've got to do is quit paddling—quit worrying and looking at the obstacles. Instead, look to Him. Lean on Him. He'll never let you down. He'll never stop helping you, no matter how many storms arise. It's time for you to sit back and enjoy the ride!